When the news broke in January that U.S. President Donald Trump had allegedly had sex with adult film actress Stephanie Clifford (known professionally as Stormy Daniels), it seemed relatively benign due to the severity of his other controversies. Mr. Trump spent the past year being investigated for Kremlin ties and obstruction of justice, tolerating neo-Nazis, allegedly abusing presidential power to enhance his personal wealth, threatening nuclear war, and generally plunging the U.S. into a toxic mix of chaos and autocracy.

As it turns out, yes. The most significant aspect of the Stormy Daniels case is not the sexual relationship, which she says was consensual – a rather novel concept given the many allegations of sexual assault levelled at Mr. Trump. What matters is the Trump team’s alleged use of non-disclosure agreements, payoffs, and threats to intimidate a target into silence – allegations that Mr. Trump and his enthusiastic backers have had to defend for decades. By refusing to stand down, Ms. Daniels provides valuable insight into how Mr. Trump maintains power – and prompts disturbing questions about what those who are too scared to speak might have to say.

Much of the information in Sunday night’s 60 Minutes interview with Stormy Daniels had been revealed in her 2011 interview with In Touch Weekly – an interview which was cut after Mr. Trump’s lawyer, Michael Cohen, threatened to sue, but was finally printed in January, 2018. While salacious – Mr. Trump, yet again, compared his sexual partner to his daughter Ivanka – the details of the sexual encounter were far from the most disturbing revelation.

Shortly after her 2011 interview, Ms. Daniels says she was threatened by one of Mr. Trump’s associates while with her infant daughter: “A guy walked up on me and said to me, ‘Leave Trump alone. Forget the story,’” she told Anderson Cooper. “And then he leaned around and looked at my daughter and said, ‘That’s a beautiful little girl. It’d be a shame if something happened to her mom.’ And then he was gone.’”

Shaken by the focus on her daughter, Ms. Daniels was too terrified to even go to the police. She stayed silent for five years, and in 2016, took a US$130,000 payoff from Mr. Cohen to stay that way. This was a sensible course of action given Mr. Trump’s four-decade history of getting ruthless lawyers to threaten any potential opponent with financial ruin – a pattern that begins with Mr. Trump’s employment of political operative Roy Cohn in the 1970s and continues with Mr. Cohen today. Mr. Trump’s main weapon of choice may be the NDA, but his team makes sure to imply that other weapons can be used as well.

In July, 2015, shortly after Mr. Trump declared his candidacy, the Daily Beast attempted to report on court documents stating that Mr. Trump had raped his ex-wife, Ivana. The inquiry into the case prompted a response from Mr. Cohen that mirrors the threat to Ms. Daniels: “I’m warning you, tread very fucking lightly, because what I’m going to do to you is going to be fucking disgusting,” Mr. Cohen told the Daily Beast reporter. “You write a story that has Mr. Trump’s name in it, with the word ‘rape,’ and I’m going to mess your life up … for as long as you’re on this frickin’ planet …”

Few media outlets reported on the allegation after that, and the media were similarly timid in reporting other allegations of sexual assault – most notably, that of a 13-year-old girl who said in a lawsuit that Mr. Trump raped her in 1994 while in the company of billionaire pedophile Jeffrey Epstein, a friend of Mr. Trump’s who was an alleged trafficker of underage girls. In her affidavit, the alleged victim claims that Mr. Trump told her to stay silent since he was capable of having her whole family killed, and noted that another victim, a 12-year-old named Maria, had disappeared.

On Nov. 2, 2016 – a few days before the election – that accuser and her lawyer, Lisa Bloom, were scheduled to hold a press conference. According to Ms. Bloom, the press conference was abruptly cancelled due to intense threats to their safety, including a bomb threat. Two days later, the accuser dropped her lawsuit.

We do not know the full story of what happened in that case – or those of the many other women who have said Mr. Trump sexually assaulted them. (Mr. Trump’s team claims he is innocent in every case.) But what we do know is that there are very troubling allegations of Mr. Trump and his lawyers threatening those who talk about it. When Ms. Daniels says she feared for her safety, take it seriously – and consider who may be scared into silence. 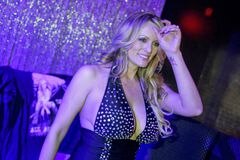 Stormy Daniels says she stayed silent about alleged affair with Trump out of fear
March 25, 2018 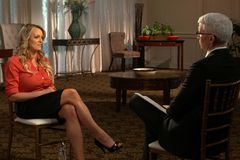