Lynette Ong is a China expert and political scientist based at the University of Toronto’s Munk School of Global Affairs and Public Policy.

It’s time we faced it: Ever since Huawei chief financial officer Meng Wanzhou was arrested by RCMP officers in Vancouver a year and a half ago, at the request of the United States, Canada has been stuck in a quagmire of hostage diplomacy.

China’s seemingly retaliatory detention of two Canadian citizens, Michael Kovrig and Michael Spavor, represents a crisis in which we have no control with respect to our entry or potential exit.

Her case is as much a trial about charging a corporate executive of bank fraud and violating sanctions against Iran as it is a high-stakes game being played by great powers using a middle power as a pawn.

However, Wednesday’s ruling by a B.C. Supreme Court justice – that Ms. Meng’s alleged crimes represent double criminality, meaning they are offences in both Canada and the U.S., which is essential for extradition – has just presented us with an exit option. Ottawa must now rely on its diplomatic deftness and stellar international reputation to steer us to safety.

Ms. Meng’s case may seem like a black swan in Canada’s bilateral relations with China – one that sandwiched us between two belligerent and irascible superpowers. Yet, seen differently, it also presents us with new strategic opportunities to spark a new beginning for Canada – a chance to reimagine its place in the world and recalibrate its relationship with both great powers.

The hollowing out of U.S. leadership in these challenging times could not have been more detrimental for Western liberal interests. In the past three decades, the world has enjoyed relative safety due in no small part to U.S.-led unipolarity. The Western alliance that champions democracy and liberal values, with the White House at its de facto head, has been largely effective in warding off pernicious encroachments on freedom and democratic values.

But that has changed with the rise of a more assertive, economically weighty and authoritarian China and the concomitant decline in U.S. economic prowess and global leadership. This has allowed China to pick fights – individually – with Western countries. This “picking-off” approach to bilateralism has allowed the Middle Kingdom to pursue an array of grievances against the likes of Sweden, Norway, Australia and Canada, including the awarding of the Nobel Peace Prize to Chinese dissident Liu Xiaobo, Hong Kong’s sale of banned books, Australia’s calls for independent inspectors to be allowed to enter countries caught in a pandemic without government consent and, of course, the arrest of a high-profile Chinese business executive.

Acting in isolation, none of these countries can match the raw or subtle power of China, and such is the position Canada has been trapped in over the past 18 months. We have been fighting the fight against China alone – and we have been elbowed into it by the U.S., which is supposed to throw its weight behind us. Ours has been a position of passivity and exasperation.

Yet, there is a silver lining – although it comes amid tragedy. The COVID-19 pandemic that has rattled the world has rendered all countries vulnerable and gives rise to the deeply felt sense that we are all in this together. This collective sentiment creates strength and provides courage for countries to throw their support behind the broad international alliance that has called for an independent inquiry into China’s handling of the outbreak and the role of the World Health Organization, an initiative first proposed by Australia.

The pandemic has spared no one, but has helped unite everyone. It has mitigated the inherent problem in bringing together a large group of countries in the name of collective action: Everyone wants to enjoy the benefits, but no one is incentivized to pay if they can ride for free on the backs of others. Indeed, while a more constrained China is helpful for other countries, none of them wants to stick their neck out and risk economic coercion or backlash. However, the widespread physical and economic casualties of COVID-19 mean everyone has already paid up front. Solidarity among the alliance pressing for an impartial investigation of China’s initial cover-up – a coalition that’s now 130 countries strong – validates this argument.

A wise administration would ride this wave of global posturing against China – a wave that will help propel the boat forward. This amounts to a rare “political opportunity” in the lingua franca of social movement scholars. It would be foolish of us to not see the opportunity the global public-health crisis presents and imprudent to let it slip past us.

Opinion
China is tightening its grip on Hong Kong. We should have seen it coming
May 26, 2020 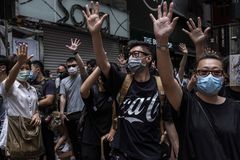 Opinion
Canada, and the world, must stand up to China’s latest attack on Hong Kong
May 24, 2020 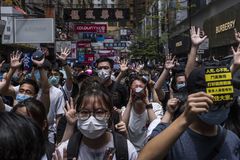