It’s finally happening. For the first time, President Donald Trump’s support base – his vaunted red-hat army – is starting to fray.

The “hammerheads,” as his former adviser Steve Bannon has called them, have been fantastically loyal since 2016. That was when Mr. Trump famously said "I could stand in the middle of 5th Avenue and shoot somebody, and I wouldn’t lose voters.”

Lo and behold, he wasn’t kidding. His base members – they consist of a lot more than rednecks, race-baiters and pitchfork populists – have stuck to him like Krazy Glue. They love his reactionary policies, his barroom vocabulary, his beatdown of political correctness, coastal elites and bloated liberal bureaucracies.

His defenders have kept him above 40 per cent in approval ratings almost every step of the way. But whipsawed by multiple crises, Mr. Trump is currently in the worst slump of his presidency, with the drop in his support numbers extending to the key components of his core congregation – non-college-educated white men, religious conservatives and seniors.

Among those who have received less formal education, Mr. Trump won an estimated 70 per cent of the vote in 2016. Recent surveys by Fox, Quinnipiac University and the Public Religion Research Institute (PRRI) have found that support has fallen in this group by around 10 per cent. The coronavirus outbreak has hit his working-class supporters hard, as many of them are in the service industry and thus more likely to have lost employment.

A similar drop can be seen in support from evangelical voters. In March, nearly 80 per cent of white evangelicals said they approved of the job Mr. Trump was doing. But in the last three months, the PRRI found that he’d lost 15 per cent of that number. Other soundings suggest the same. Among the causes may be Mr. Trump’s insensitive response to the police killing of George Floyd. Religious leaders, such as Pat Robertson, the founder of the Christian Coalition, berated Mr. Trump for his lack of compassion.

Seniors, meanwhile, have proven to be the demographic most vulnerable to COVID-19, and it’s apparent that they have grown dissatisfied with Mr. Trump’s handling of that crisis, too. National polls show a significant slippage, and in crucial Florida, where 21 per cent of voters are elderly, Mr. Trump dominated the seniors’ vote by 17 points over Hillary Clinton; he now only leads Joe Biden, the presumptive Democratic party nominee, by a very slim margin.

Rock-solid support from his base is vital for Mr. Trump, because his support has never extended much beyond it. He has been unwavering in tailoring policies aimed directly at his loyalists and continues to do so.

With just four and a half months until the election, his overall polling numbers are some of the lowest he has ever had. He demanded that CNN retract and apologize for a poll this week showing him trailing Mr. Biden by 14 points, 55 per cent to 41 per cent, among registered voters. However, the poll by CNN, which bluntly rejected the strange demand, wasn’t that out of line with others. One of Mr. Trump’s favourite pollsters, Rasmussen Reports, showed him with just a 43-per-cent approval rating among likely U.S. voters on Thursday, with 55 per cent disapproving of the job he’s done.

In national crises, people want a steady hand at the wheel; steadiness is not of one of this President’s foremost strengths. His response to Mr. Floyd’s death and the unrest it has sparked appear to have hurt him more than the public health and economic crises. Polls show Americans support the protesters over the police by a wide margin. Mr. Trump has sided with law and order, figuring that’s what his base wants.

“It seems to me that Trump represents the death rattle of an older America,” observed Eddie Glaude, chair of the department of African-American studies at Princeton University. “Everything he’s doubling down on is precisely what we’re trying to leave behind.”

Mr. Trump’s use of special forces to remove protesters near the White House was particularly costly. In an extraordinary development, both Defense Secretary Mark Esper and chairman of the Joint Chiefs of Staff Mark Milley have come out publicly against using the military to intervene in domestic dispute.

Mr. Biden hasn’t been doing much in the way of campaigning, but the Democrats may be content to just have him stay out of the way and let Mr. Trump defeat himself come November.

But in the context of the crises buffeting this President, four-and-a-half months is a long time. In that time, the economy could rebound, the impact of the coronavirus could significantly diminish and the racial protests could disappear. Much of Mr. Trump’s lost support, including from his base, could be restored.

Even still, it will be a difficult road for him. Even before the multiple crises hit, his support level was below a winning threshold. 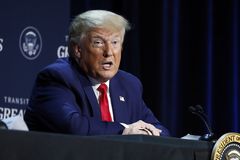 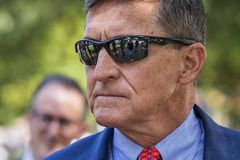 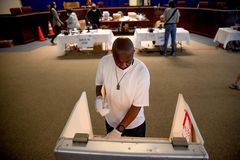