Chris Alexander is a former minister of citizenship and immigration who previously served in the Canadian embassy in Moscow, including as deputy head of mission.

When Rudyard Kipling published his short story How Fear Came to the Jungle in 1894, Tsarevich Nicholas had just proposed to Princess Alix of Hesse and by Rhine. Nicholas had been in England the previous year for the wedding of the future George V, and would visit England again in 1894 for the birth of the future Edward VIII. By November 1, he was Tsar Nicholas II after his father Alexander III died at the age of only 49.

In 1894, the old Anglo-Russian imperial “Great Game” – a term popularized by Kipling’s novel Kim – still had more than a decade to run. The Anglo-Russian Convention put an end to colonial contests for influence in Tibet, Central Asia, Afghanistan and Iran – for a time.

After the Russian revolution in 1917, Lenin and Stalin returned to Kipling’s theme, elevating fear into an instrument of state policy on a scale previously unknown. In their quest for world revolution and later the Cold War, they and their successors deployed violence and repression to ensure “fear came to the jungle” on new fronts every decade.

So it was no surprise to see Vladimir Putin’s throwaway reference in his April 21 state of the nation address to Shere Khan, the Bengal tiger who is custodian of Kipling’s “law.”

The past year has given the Stalin-revering Mr. Putin many reasons to replay the fear card.

This has been an annus horribilis for the Russian dictator – his worst yet.

Today’s Kremlin is desperate to silence critics: Mikhail Leontiev, one of Mr. Putin’s ideologues, had this to say in a June, 2020, interview to Vesti FM, a Russian radio station: “We will be faced with the need to deprive young people of voting rights, probably in the near future. Because otherwise we will lose the country. It’s true. Because these people do not know anything, this is almost Ukraine, it is monstrous. Well, my opinion: Today’s youth do not need voting rights at all. Because youth is a painful condition that goes away with age.”

Mr. Leontiev, once a journalist, is now vice-president of Rosneft, Russia’s biggest oil company. It’s perfectly obvious why he is motivated to keep Mr. Putin in power.

Less obvious today is where Russia is headed. As the pandemic struck, the country closed its borders and experimented with shutting the internet for platforms that carry dissenting voices, as the Chinese Communist Party has done.

Yet within weeks of Mr. Leontiev’s interview, Belarusian voters, led by young people, had chosen president-elect Sviatlana Tsikhanouskaya. She has been criss-crossing Europe ever since, building support for a democratic Belarus. Belarusian activists have been in the streets for nine months. Ms. Tsikhanouskaya’s success is Mr. Putin’s nightmare.

The recent deployment of more than 100,000 troops to Ukraine’s borders, to occupied Ukrainian Donbass and Crimea (which Mr. Putin invaded in 2014) and to Belarus were all calculated to inject a fresh dose of fear. Why? Because there is nothing Mr. Putin dreads more than the democratic impulses that drove Ukraine’s 2013 Revolution of Dignity and the 2020 elections in Belarus.

He is now consumed by these fears. In his April 21 speech, Mr. Putin used the term “coup d’état” repeatedly – just before the Kipling reference.

Yet seven factors over this past year are conspiring to ensure his discomfort will continue.

First, as outside support for democracy in Belarus grows and Alexander Lukashenko’s isolation deepens, the political reorientation and cultural revitalization of Belarus are likely to continue.

Second, in Ukraine several key influence-peddling Kremlin oligarchs have been side-lined, while support for integration into the EU and NATO continues to grow.

Third, with Donald Trump out of office, Mr. Putin’s four-year “holiday” from White House pressure is over. As President Joe Biden rallies allies and Europe wakes up to Mr. Putin’s mischief, the Kremlin is isolated.

Fourth, Russia is now paying a price for the policy of subversion that has been Mr. Putin’s hallmark, as the Czech Republic, the U.S. and others react to major acts of sabotage and cyberattacks.

Fifth, while Alexey Navalny remains on hunger strike and in prison, his exposé of “Putin’s Palace” – the Russian President’s billion-dollar vanity project – has been viewed by 117 million people.

Sixth, COVID-19 has struck Russia hard. While official statistics undercount the toll – on pain of death for those who fail to toe the line – excess deaths over the pandemic period has now, according to the Moscow Times, climbed to more than 420,000 – higher than Brazil.

Seventh, and perhaps most decisively, Mr. Putin’s always razor-thin credibility is evaporating. Until recently, legions of business leaders, politicians and columnists were willing to call him a “visionary” – for a price. No longer: Mr. Biden’s “killer” comment stung because it was true.

In When Fear Came to the Jungle, Shere Khan – the “king of the jungle” – explains why he killed “Man”: “It was my right and my Night.”

Mr. Putin is unlikely to change his stripes. The apotheosis of this week’s speech was another thinly veiled threat to both Russians and to outsiders. “Those behind provocations that threaten the core interests of our security,” he said, “will regret what they have done in a way they have not regretted anything for a long time.”

Our response should be rational and fearless. When Mr. Putin’s propagandists tell lies, we need to correct the record. Where he threatens, we should exude confidence – while strengthening defence and co-operation among all democracies. 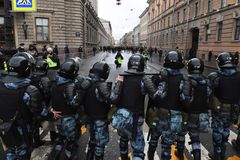 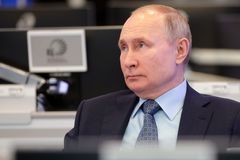