Erna Paris is the author of several books including The Sun Climbs Slow: The International Criminal Court and the Struggle for Justice

A United Nations fact-finding mission on the anguish of the Rohingya minority in Myanmar has put the world on notice. By naming six alleged perpetrators, including the army commander-in chief, and by using the term “intent to commit genocide," three independent commissioners have effectively challenged the international community to uphold criminal accountability and the rule of global law at a time when respect for the postwar legal order is weakening.

Genocide – the most odious crime ever codified – is a legal, not a descriptive, term. Leaders and institutions are normally wary of the accusation because it incurs serious international obligations. According to the 1948 Genocide Convention, member states must not only attempt to prevent this crime, but also punish perpetrators of it.

The UN report is replete with evidence that constitutes “reasonable grounds” for meeting the legal threshold of genocide. The commissioners document atrocities such as forced deportations, mass killings, the burning of houses and the rape of thousands of women and girls. The Rohingya themselves have documented these events with shocking cellphone videos that will be useful for future prosecutions. Hate speech has incited violence, according to the commissioners, who fault Facebook for allowing incendiary posts. According to Reuters, some of these have included calls for the Rohingya to be shot, burned, and fed to pigs; pornographic anti-Muslim images; and descriptions of the group as “dogs,” maggots” and “rapists.”

According to my own studies, the dehumanization of a designated enemy is frequently a prelude to genocide. When the Rwandan radio station Radio Télévision Libre des Mille Collines called the Tutsi population “cockroaches” during the 1994 genocide, ordinary people rushed into the streets with machetes. When the Hitler regime called Jews dirty, disease-ridden animals, it became easier to exclude one’s former neighbours from humanity. Stripping the targeted group of citizenship is also a warning sign of genocide. When the Rohingya were thus deprived in 1982, they were left stateless, without rights, and vulnerable in the country they had called home for centuries. Their very identity was contested. Officially, they are no longer “Rohingya,” but “Bengalis.” Foreigners, in other words.

In addition to the six named military men, the commissioners also blamed Aung San Suu Kyi, Myanmar’s civilian leader and a Nobel Peace Prize laureate, calling her a moral coward for her failure to acknowledge continuing human-rights violations. Finally, they have challenged world governments to confront the criminal impunity of the perpetrators. The obligation to prevent and punish genocide incurred under the 1948 Convention makes criminal accountability a foundation of international law.

So what’s next? The obvious remedy would be a Security Council referral to the International Criminal Court (ICC) whose mandate is to try the perpetrators of the world’s most serious crimes and bring justice to the victims. But the Council has become famously impotent in recent years. Russia and China, in particular, veto proposals at will, and there is little chance this route to justice will prevail. The ICC prosecutor can initiate cases when the suspect individuals are citizens of a country that is an ICC state party, but Myanmar is not.

On the other hand, Bangladesh, where most of the 700,000 deported Rohingya now live in camps, has signed on to the ICC. Only crimes committed on Bangladesh soil would be eligible for prosecution, but mass deportations are a criterion for genocide. The ICC judges are presently considering a request by the Prosecutor to open an investigation on these grounds.

Another option is for the United Nations create a designated ad hoc court to try the perpetrators, as it did following the wars in Bosnia and Rwanda in the 1990s, but arresting indicted persons without the cooperation of the Myanmar authorities would be difficult. Underlying each of these imperfect alternatives lies the need to collect uncontaminated evidence for future use, as is being done in Syria. Justice may be slow in coming; it may even look non-existent in the short term; but those who commit genocide should never feel safe

General and targeted sanctions are another means of redress. At best, they are co-ordinated internationally, which might happen – the European Union executive is meeting to discuss possibilities – but failing this, individual countries can take a stand. This week, Global Affairs Canada reminded Canadians that it has committed $300-million over three years to address the needs of the displaced (a smaller sum than recommended by special envoy Bob Rae in his April report) and that the government has imposed targeted sanctions against senior military officers, including asset freezes.

In principle, Canada supports the UN commissioners’ call for high-ranking officers to be prosecuted, but we can do more. Canada – a founder of the ICC, a voluble promoter of human rights and the multilateral liberal order – should immediately spearhead a coalition of like-minded countries to mount a legal assault against the impunity of those accused of genocidal intent. For the same reasons, both reputational and pragmatic, Canada must revoke the tainted honorary citizenship of Aung San Suu Kyi. Symbolism matters.

Canada has the political capital to assume the all-important defense of international law. We should use it. The norms that have secured relative peace for 70 years are under threat.

By employing unprecedented language, the commissioners of the United Nations fact-finding mission on Myanmar have thrown down the gauntlet. Their strategy was clever, but also risky. Because the stakes have been raised so high, the outcome will be both literally and symbolically consequential.

Whatever global action is taken – or not taken – will offer us a crystal-ball glimpse into the future of the rule of international law. 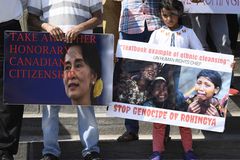