Alexandra Horowitz is a professor at Barnard College, Columbia University, where she teaches seminars in canine cognition, creative nonfiction writing and audio storytelling. As Senior Research Fellow, she heads the Dog Cognition Lab at Barnard. Her books include Being a Dog: Following the Dog Into a World of Smell, Inside of a Dog: What Dogs See, Smell, and Know and, most recently, Our Dogs, Ourselves: The Story of a Singular Bond, from which this essay is adapted.

You own your dog. They are one of quite an array of items that you own, including perhaps: the chair you sit on, the car you drive, the clothes, watch or glasses you wear and the means – paper or electronic – of reading these words. To say that you own your chair is to say that you have absolute rights to do with your chair what you’d like. You have rights to sit on it, turn it upside down, re-upholster it in orange velvet, keep it un-sat-upon in the basement for 20 years or toss it out. Your chair has no say in it. It cannot complain, sue you or, for that matter, make any decision at all. Should you cut off its legs, or cover its seat in plaid, it must simply suffer through it.

Weirdly, while we consider dogs to be family, not furniture, the same is more or less true of your dog as your chair. Dogs, unlike chairs, make decisions, feel pain, suffer when abandoned, enjoy rolling around in the snow or fallen leaves and presumably do not want to be sat on or donned in plaid, but they have precisely no rights in the matter.

There are some constraints on our behaviour with our pups: Animal-cruelty laws forbid injuring animals and forbid throwing them away. The asterisk on both of these admonishments, though, is astronomical: Neglecting a dog is allowed, if it is not “wilful”; so is throwing the dog away, as long as it’s in the direction of another set of arms (such as relinquishment to a shelter). Causing animal suffering is disallowed, but only “unnecessary” suffering – meaning cruelty that is deemed, by the owner, “necessary” for training or any other reason, is perfectly a-okay. And what would be considered minor cruelties – hitting a dog who doesn’t co-operate with your request to “sit”; leaving dogs alone all day; failing to give them sufficient stimulation; disposing of them when they are inconvenient – are perfectly common, and unpunished. In the eyes of the law, a dog is a chair is a dog. And a fairly low-end chair, at that.

As chair-equivalents, dogs are treated more or less non-seriously when they come up in legal settings. In adjudicating divorce cases in which a dog or dogs are at issue between the unhappy couple, judges typically dismiss the case, and are fond of writing things such as, “After all is said and done, a dog is a dog.”

"… Don’t ever bring a stupid issue like that before me,” one judge responded to the possibility of a pet custody case. “Go out and buy another dog.”

In such disputes, dogs are “assignable property,” and may be granted to one or the other spouse, along with all the other domestic possessions, under the equitable distribution laws of wherever the dog (and the couple) resides. That dogs do not seem like property to assign does not typically sway judges. In response to an application asking for “exclusive interim possession” of nine-year-old Kenya and two-year-old Willow, the judge compared the application to one party asking for exclusive ownership of “the family butter knives.” Assigning custody would be like saying that each party in a divorce should have “access to those knives for 1.5 hours per week to butter his or her toast.”

Casually inserted in all of these considerations is the language of ownership. We own chairs, cars, butter knives, dogs. Ownership emerges with the distinction, starting with Roman law, between “persons,” who had rights and interests, and “things,” which were the property of “persons” and lacked any rights. At no time have only humans been persons (and, for too long a time, some humans were not considered persons). But is it accurate any longer to speak of us as dogs’ “owners,” in the same way that we own chairs, cars and butter knives? Are they only our “things”?

The law says “things”; my heart says no. And I am disposed to listen to my cardiac organ over the organ of government. If I consider the dogs in the room with me – really gaze at their forms, curled up on pillows on the rug, sharing the space with my son – they are clearly more akin to my son than to the pillows. They are unequivocally family – even if there is not a simple familial term to capture their relational role. We differ by species only. I am their person and they are my dogs. If there is possession, it is two-way: us of them and them of us.

Dogs are family not just to me but to the millions of people who share holidays, vacations, beds, birthdays and play with dogs – just as we don’t (typically) do with our chairs. In the past 50 years, the question of animal pain (they feel it), rationality and self-awareness (some show it) has been posed and answered scientifically. The law does not reflect most of what we now know. It is time for a change.

Some legal thinkers have come up with novel solutions. For instance, Steven Wise has proposed personhood for some animals – which is not as peculiar as it sounds. To the law, being a member of Homo sapiens is not what makes you a legal person. Corporations can be persons. With personhood, animals would be extended some of the rights and freedoms that we extend to other members of our human family.

I am partial to a suggestion by David Favre that a new designation, “living property,” might suit many animals. This term would acknowledge that dogs are agents, owners of themselves – like newborns are, or wild animals in national parks – even if they still are also property, and responsibility, of another. This status would require that owners have a real concern for animals’ well-being – keeping their interests in mind, not just those of the owners.

My sweet, earnest dog sits on my soft, comfy chair, and I see the two of them as completely different. Our dogs looks at us; we are seen by them. I want my actions – our culture’s actions – to be worthy of that gaze. 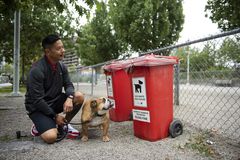 The bear necessities: How contact with humans can prove lethal
August 23, 2019 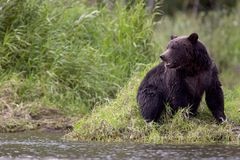 How to incorporate your pets into your estate planning
August 22, 2019 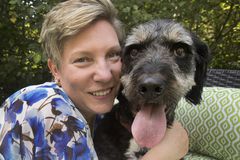