Bank of Canada Governor Stephen Poloz says the central bank is planning public consultations to determine whose image should appear on a revamped $5 bill.

No need. Only one nomination is required. The clear, logical, long-overdue choice: Terrance Stanley Fox.

As the 40th anniversary of the iconic Marathon of Hope approaches, there is no better way to honour Terry Fox than to put his face on a five-dollar bill. Canada has the loonie. It has a toonie. Now it needs the Terry.

Credit for this idea goes to Dave Teixeira, a businessman and long-time organizer of the Terry Fox Hometown Run in Port Coquitlam, B.C.

“I suggest Terry Fox,” he posted on Twitter after the Bank of Canada’s call for nominations. Soon the hashtag #TerryFoxFiver was trending, and so it should be.

Sir Wilfrid Laurier, Canada’s seventh prime minister, has been on the fiver since 1972. He’s done his time, and should be retired. Among numismatists, Canada’s money is known for its vibrant colours and striking images – the Canadarm, a polar bear, the Vimy memorial, the double helix.

Then, of course, there is royalty. Since the Bank of Canada began issuing bank notes in 1935, almost all our money has been adorned with stoic photos of the monarchy. The first series of bills featured King George V and Queen Mary, along with Edward, Prince of Wales, and Princess Mary, and then-eight-year-old Princess Elizabeth.

Since that time, the matriarch of the dysfunctional British family, Queen Elizabeth II, has been ubiquitous on Canadian bills and coins. In 2018, the Bank of Canada issued a new $10 bill featuring the image of human-rights pioneer Viola Desmond. She was the first non-white person, the first non-royal woman and the first non-politician/royal on a banknote.

That move earned the Bank of Canada kudos around the world. And we should learn a lesson from that experience: Keep honouring our heroes, not our figureheads.

For those who need a refresher, Terry is a Canadian uber-hero. On March 9, 1977, at the age of 18, he was diagnosed with osteogenic sarcoma (bone cancer) in his right leg. Less than a week later, his leg was amputated 15 centimetres above his knee.

The night before his surgery, Terry’s basketball coach brought him an article about an amputee runner and the teenager decided, then and there, that he was going to run across Canada to raise money for cancer research.

In October, 1979, Terry wrote a now-famous letter looking for support for his crazy idea, telling potential supporters: “I’m not a dreamer, and I’m not saying this will initiate any kind of definitive answer or cure to cancer, but I believe in miracles. I have to.”

A few months later, on April 12, 1980, he dipped his artificial limb into the Atlantic Ocean in St. John’s and began the quixotic cross-country adventure, with his unique skipping step. For the next 143 days, Terry would run the equivalent of a marathon a day, a staggering 5,373 kilometres. Outside Thunder Bay, he fell ill. The cancer from his leg had spread to his lungs.

Terry died on June 28, 1981, one month short of his 23rd birthday. He had boldly hoped to raise $1-million. As the Marathon of Hope picked up steam, he dreamed of collecting $1 from every Canadian, or $23-million.

Today, the Terry Fox Foundation has raised more than $800-million for cancer research, the equivalent of 160 million Terry Fox fivers.

The annual Terry Fox Run has captured the imagination of whole new generations, and now there are runs in more than 60 countries worldwide. The foundation also continues to innovate, most recently with the creation of the Marathon of Hope Cancer Centres Network, which will advance precision oncology.

Back in 2005, the Royal Canadian Mint issued a commemorative $1 coin featuring Terry. Now it’s time for our money-makers to aim higher – like Terry himself. And what better way to extend the Marathon of Hope than by honouring the national treasure that is Terry Fox, one fiver at a time?

Bank of Canada to seek nominations for who should be on the new $5 bill
Subscriber content
January 9, 2020 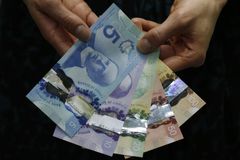