Doug Ford loves the three-word slogan. Following on For the People and Open for Business, he has made it his priority to Get Ontario Moving. No fan of nuance, Premier Ford paints a dire picture of the province’s mobility “crisis”: He describes Ontarians as paralyzed, highways clogged, subways packed and people left stranded. But thankfully, in his words, “relief is on the way.”

Mr. Ford’s Getting Ontario Moving Act, tabled in the Ontario legislature on May 2, is a many-splendoured thing. Its proposals range from uploading Toronto’s new subway projects to the province to allowing for high-styled handlebars on motorcycles to improving traffic flow on our highways. To this end, Ontario’s Transportation Minister Jeff Yurek has announced a two-year pilot project to test higher speed limits (110 kilometres an hour) on four stretches of Ontario’s 400-series highways as an exploratory step toward raising limits province-wide.

It has come to Mr. Yurek’s attention that Ontario’s current highway speed limit of 100 km/hr resulted from an adjustment – down from 70 mph or 112 km/hr – made in the 1970s to conserve fuel during the OPEC energy crisis. That we are living through a climate crisis whose consequences will render the 1970s spike in fuel prices a mere footnote in the history books, doesn’t register with the Ford government. Making his announcement at a carpool lot near London, Ont., Mr. Yurek dismissed the environmental implications of increased speed limits – a vehicle uses 20 per cent more fuel at 120 km/h than at 100 km/hr, according to Natural Resources Canada – as irrelevant in an age of fuel-efficient and electric cars.

It was a curious endorsement from a Minister whose government’s first act was to scrap Ontario’s cap and trade program and with it, the rebate on electric and hydrogen vehicles before cancelling the province’s Drive Clean vehicle emissions-testing program. The attitude seems to be: don’t support environmental behaviour but praise it, as needed, when it happens to happen.

So, who is this policy designed to please? A 10 km/hr increase on a few stretches of highway won’t impress the pedal-to-the-metal contingent. Nor is it likely to ease commutes or cross-border transport, as the Minister hopes, overlooking two important facts: that Ontario’s worst commuter congestion occurs around the Greater Toronto Area, where no pilot is planned and where standstill drivers can only dream of three-digit speeds, and that since 2008, all commercial vehicles in this province are by law equipped with speed-limiting systems set at a maximum of 105 km/h.

On the question of safety, the Minister responded to the undeniable fact that higher speeds raise the risk of fatalities – speed caused 83 of the 483 fatalities on Ontario’s highways in 2016, according to Ministry statistics – by emphasizing that the proposed increase is a minor one. “We’re not going to become the Autobahn,” Mr. Yurek said.

No, we are certainly not. But if the province is considering boosting highway speeds, a look to the land of the Autobahn wouldn’t hurt. Advocates for higher highways speeds often point to Germany as evidence that speed and safety are compatible: after all, fewer people die on German roads (4.1 per 100,000 in 2016 according to the WHO) – where vast stretches of the Autobahn have only an “advisory” limit of 130 km/h - than on Canadian ones (5.8 per 100,000).

But having had the dubious pleasure of getting a driver’s license in both Ontario and Germany, I would argue that the differences in driving culture between the two places run deep. Ontario’s certification felt like a beach holiday compared with the north-face ascent that is the German driver’s test.

From my first encounter with a German driving instructor – who wouldn’t allow me behind the wheel because I was wearing sandals – to the written test, which probed my knowledge of everything from brake booster mechanics to reaction times under varying conditions – to the practical test, which I nearly failed for not doing a shoulder check for cyclists at every right turn, it was a qualitatively different experience. As was driving on German highways, where – unlike in Ontario, drivers pass each other willy-nilly – passing a car on the right is a traffic offence that carries a fine of €100 ($150) and one demerit point.

The main takeaway from the land of the Autobahn is not speed, but driver education, enforcement and environmental performance. Owing to increasingly ambitious emissions standards for its vehicles and a growing number of municipalities that limit or ban higher-emitting ones, auto-loving Germany produces 40 per cent less carbon dioxide emissions from fuel combustion per capita than Canada, according to World Bank figures from 2014.

It would be nice to dismiss this pilot project as a minor thing - a symbolic concession to Ontario’s frustrated drivers - that won’t kill anyone. But not even that is true. Traffic flow is a problem on Ontario highways, but a 10km/h raise in speed limits isn’t going to fix it. The move is nothing more than a distraction from a much bigger problem: The transportation sector is the main contributor of greenhouse gases in this province.

Maybe the people who Doug Ford claims so proudly to govern should be asking their Premier, in his preferred triplet form: Moving Toward What?

Opinion
Why does Doug Ford hate the future? He’s sure trying to burn it down
Subscriber content
May 11, 2019 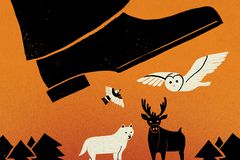 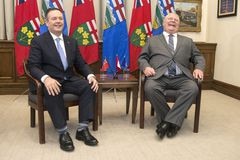 Opinion
What were all the Doug Ford critics doing when the Liberals ran up the bills? Egging them on.
May 4, 2019