Torontonians are full of stories about near-misses with a driver, about almost being hit by someone running a red light, or ignoring pedestrians’ right of way. A couple of weeks ago, during their not-even 10-minute walk to school, my husband and kindergartner were almost hit when a driver failed to even slow down while turning right. The car only stopped when my husband thumped the hood so hard that his hand hurt the next day.

For years, such tales have just been anecdotal evidence. There was no proof drivers here were becoming increasingly rude, dangerous and simply heartless – in October, there was a hit-and-run of a mother, grandmother and a baby in a stroller, on the sidewalk. Then, last Thursday, Toronto Police Chief Mark Saunders produced a report that verified that gut instinct: As enforcement of traffic laws has plummeted, collisions in the city have spiked.

In 2012, when there were about 50,000 collisions, police handed out almost 600,000 traffic tickets. By 2018, the number of tickets had dropped to just more than 200,000 – and collisions had jumped to almost 80,000. Annual pedestrian deaths almost doubled in that same time frame. This is why I don’t call car crashes “accidents": The word obscures how many are entirely preventable.

According to a report on road safety put out by the World Health Organization last year, collisions are up globally, to about 1.35 million annual crash deaths. In New York, cyclist fatalities have more than doubled since last year, one reason why families of road death victims held a public memorial on Sunday. In Britain’s capital, it’s Road Safety Week, drawing attention to the 112 people killed in traffic collisions in London in 2018.

The WHO makes special note of “middle-income” countries in Europe, Asia and Africa, where deaths are rising as more cars get on the road. In a stat that doesn’t quell a mother’s anxiety, collisions are the leading international cause of death among those ages five to 29.

The frustrating part is that many of the solutions outlined by the WHO, the United Nations and others are well known. Implementing them – from lower speed limits, to cyclist-friendly streets – is what’s unnecessarily difficult. Changing attitudes isn’t impossible: While about 90 per cent of Canadians wear seat belts, it wasn’t mandatory nationally until 1991. The obstacle now is complacency, the acceptance of collisions as a part of life. The injuries and fatalities caused by motor vehicles have become less important than drivers’ need to get places, fast.

Of Canadian cities, Toronto has the worst record for pedestrian deaths. We’re at 31 this year, while Calgary, with just under half the population, is at three. Nineteen pedestrians have died this year in Montreal, which has about 60 per cent of Toronto’s population. That’s still more than last year and plans are under way to add four to six seconds of crossing time to almost 2,000 traffic lights by 2022.

It’s a good move, but won’t eliminate the attitude that streets are made for cars, first and foremost. "A pedestrian is the most vulnerable user of the road. With that comes a responsibility to be careful for your safety,” Montreal police officer André Durocher told CTV. “If I’m in a situation where I’m the most vulnerable, I’m going to be twice as careful.”

That’s fairly callous, when the vast majority of pedestrians killed in Toronto so far this year have been seniors attempting to cross in the meagre time allotted to them. If they can’t drive any more, their options are to walk, take transit or lose their independence. Getting into a car doesn’t guarantee safety, anyway, as most global road deaths are passengers.

Plus, reducing emissions is another life-and-death issue. In related silliness, BBC ran a story last month singling out a type of asthma inhaler for its heavy carbon footprint, as though respiratory problems are a cause, not an effect, of the carbon problem. Somehow, the ripple effects of a societal addiction to motor vehicles have become the fault of those suffering preventable illnesses, or even death.

In late September, Chief Saunders denied on CBC Radio that there had been a significant reduction in traffic enforcement. This Thursday, he will be asking Toronto council for $1-million to reinstate a dedicated traffic safety team. Extra money for fulfilling a basic job requirement isn’t justified, but the situation is so dire, there’s no other choice. Hopefully soon I’ll be able to walk my kid to school without having a panic attack.

Opinion
If we want people to give up their cars, we need to fix our streets
November 15, 2019 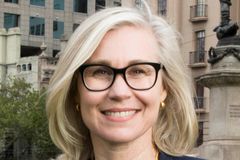 Opinion
The long, dangerous road to the world of driverless cars
January 4, 2019 Opinion
Why cars splashing pedestrians is no joke
August 3, 2018 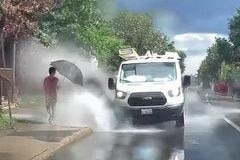