While others are spending their summer watching buzzworthy TV like UnREAL or The Americans, I've become addicted to a different show, called Who Are Those People Standing Behind the Prime Minister, And How Did They Get There Anyway?

Another episode aired yesterday, and while it's early in the season, it was pretty gripping television. Stephen Harper was in Hay River, NWT, to talk about paving a local highway and to evade questions about why he was the last person in his office to know about Nigel Wright's payment to Mike Duffy, including the cleaning lady and the guy who delivers the sandwiches.

Meanwhile, standing behind the Conservative Leader was a group of men in hard hats and yellow safety vests. Who were they? Local Tory grandees in camouflage? Senators on the run? Were these the men who would be paving the highway with dollars from Ottawa and, if so, were they getting paid double time to stand behind Mr. Harper and look interested? Most of them looked more interested in what was in their lunch boxes and, yet, dutifully they clapped when it came to the part about Canada being safer and richer.

I suppose the guys in hard hats were lucky, in a way. At least they weren't the audience for the pot speech. In an earlier episode of Who Are Those People Standing Behind the Prime Minister, Mr. Harper denounced the scourge of marijuana which is tearing apart the social fabric of this country, while behind him a group of respectable citizens looked as un-stoned as possible. Did they know, going into the event, they'd be weed window-dressing? Surely some of them would have preferred to nod soundlessly at the home-renovation tax-credit announcement instead.

Perhaps these stand-ins – for they are meant to represent you, hard-working, middle-class taxpayer – were just glad to be invited to a Conservative rally. Those are notoriously difficult to attend, of course, without providing a retinal scan and a first-born child (I'm exaggerating, of course. You can also leave a younger child).

The rules of campaign photo ops have been so codified that they make kabuki look like a mosh pit. They are utterly fascinating, because they're so artificial and yet so commonplace that their bizarre staginess no longer even merits notice.

It's not just Mr. Harper, either. There are spinoff shows, Who Are Those People Standing Behind the Opposition Leader, and Who Are Those People Standing Behind the Guy With One Name. They happily surround the candidates on docks and in parks, in front of buses that bear slogans of change, and they maintain expressions of calm acceptance no matter how banal the pronouncements they're forced to hear. They are a happy, ethnically diverse lot, sometimes standing and sometimes sitting, but always mute. Perhaps they've had their tongues removed; I wouldn't know, since we never learn anything about them.

In their very silence, perhaps, they are meant to represent the electorate: Listen to this soundbite and save the questions for the afterlife. I am waiting for the day when one of them diverges from the script and puts up a hand to say, "Um, how would that work, exactly?" or, "Didn't you promise that last time, too?" Across the country, legions of youth disaffected from the political process are perhaps wondering how they, too, can apply to be in this reality show. I wouldn't bet the future of the country on it, though.

Perhaps we get the campaign we deserve, and if it's as empty, artificial and stage-managed as a toddler beauty pageant, then it's partly our fault. Politicians who dare leave the strict confines of the teleprompter, or attempt any behaviour that is idiosyncratic or even recognizably human, are kicked in the teeth. I'm sure there are people who still think that Stockwell Day commutes to work by Jet Ski, or that Ed Miliband doesn't know how to eat a bacon sandwich.

Reaching out to the non-mute public can be disastrous, too. There are many people who think the British Prime Minister Gordon Brown put the nail in the coffin of his 2010 election campaign when a photo op with a member of the public went disastrously wrong. Mr. Brown's advisers arranged for him to meet a woman who'd heckled him at a campaign stop; it did not go well. Afterward, not realizing his mic was still live, he said to his team, "That was a disaster … she was just a sort of bigoted woman." Mr. Brown no longer lives at 10 Downing St.

We say we want authenticity in candidates, people who speak from the heart like Senators Elizabeth Warren and Bernie Sanders in the United States, but what is heartfelt to one person is another person's late-night punchline or Twitter meme. Just ask Howard Dean, who has probably not raised his voice above a whisper since 2004, or NDP candidate Linda McQuaig, who said something many people feel to be true, that "a lot of the oil sands oil may have to stay in the ground" if Canada is to meet its emissions goals.

There's truth, and then, in a campaign, there's the script.

Anyway, I have to go. I'm missing Who Are Those People Standing Behind the Prime Minister? It may be an episode I've seen before; it's hard to tell. But I'm hoping one day there will be a twist ending.

A snapshot of how federal leaders frame their image
June 11, 2015 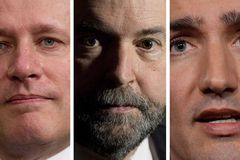 Trip to Edmonton shows how worried Conservatives have become
August 14, 2015 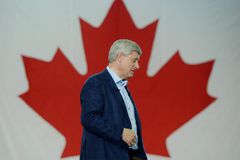 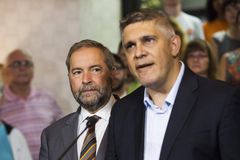