The firing of FBI director James Comey is an ominous yet predictable sign of the erosion of democracy in the United States of America. It is a textbook authoritarian move, part of a continuing desecration of constitutional norms and laws that have been progressing since Donald Trump took office. It may shock you, but it should not surprise you. This is not a bombshell but a deftly timed grenade.

In March, I wrote that, without proper oversight, Mr. Trump was akin to a criminal able to select his judge and jury and postpone his own trial. He had already fired officials investigating his ties to Russia, including acting Attorney General Sally Yates and U.S. attorney Preet Bharara. Furthermore, the Trump administration had put the investigation under the jurisdiction of men aiming to impede Russian revelations, like Representative Devin Nunes – who had secretly co-ordinated meetings with revealed foreign agent and former national security advisor Michael Flynn – and most notably, Attorney General Jeff Sessions, who had to recuse himself after it was revealed he had met with Russian ambassador Sergey Kislyak and lied about it.

On Tuesday, the subjects of an FBI investigation were able to fire the man investigating them: Mr. Trump and Mr. Sessions orchestrated Mr. Comey's departure. His firing arrived the day after damning testimony from Ms. Yates and former director of National Intelligence James Clapper. Their admissions, and reignited interest in the Russian-interference investigation, made it obvious that James Comey was newly vulnerable, to the point that a Russian expert tweeted her anticipation of his firing.

That the U.S. media is calling Mr. Comey's dismissal a surprise is notable: The purge of Mr. Comey is a standard power play, the kind one typically sees in states like Turkey or Russia as dictators consolidate power. To not be surprised is to acknowledge the horrifying fact that the United States is becoming an autocracy. Of course they are going to fire anyone who stands in their way. Of course they will disregard the law. This is difficult for Americans unaccustomed to autocratic rule to process, but it is necessary that they do so if they seek to stop it.

Another tell-tale sign of autocracy is the blatancy of the administration's actions. The firing of Mr. Comey can be reasonably interpreted as an admission of guilt – but the transparency does not bother them. In fact, it pleases them. Their actions are meant to tell the public: "We know that you know what we did, and we do not care, because there is nothing you can do about it."

This flagrant hostility to the intelligence community, the public and the law was further solidified when Mr. Trump welcomed Russian foreign minister Sergey Lavrov to the White House the next day. Mr. Trump, a former reality-TV star, staged the week's events like a drama: a damning hearing on Monday, the firing of the lead investigator on Tuesday, the embrace of the foreign collaborator on Wednesday. In the White House, Mr. Lavrov stood side by side with Secretary of State Rex Tillerson and mocked Mr. Comey. "Was he fired? You're kidding," he sneered, and Mr. Tillerson, the recipient of an Order of Friendship medal from Russian president Vladimir Putin, did not protest.

Some have compared the Russian interference investigation to Watergate. This is a fatuous comparison. The fundamental question of Watergate was not "With which country do the greatest loyalties of the administration lie?" In Mr. Lavrov's visit to the White House immediately following Mr. Comey's firing, we may have an answer.

What happens next? Likely more purges and baseless prosecution of those investigating Russian interference, more complicity from the Republicans and more futile protests from the Democrats. The intelligence community is the wild card. The investigation will likely be severely impeded, if not outright halted, but investigators could at least shed light on how deeply the U.S. government is compromised.

It has been nine months since Senator Harry Reid wrote to Mr. Comey and begged him to reveal what he knew about Russia. As a participant in an active classified investigation, Mr. Comey was unable to comment freely on the nature of the threat. It is time for him and others who have been briefed to speak out. The American public deserves to know what – and who – we are facing. 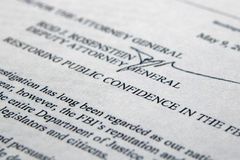 Doyle: The Comey firing on TV – fear, loathing, pity, terror and such fun
May 10, 2017
Follow us on Twitter @globedebate Opens in a new window
Report an error Editorial code of conduct
Due to technical reasons, we have temporarily removed commenting from our articles. We hope to have this fixed soon. Thank you for your patience. If you are looking to give feedback on our new site, please send it along to feedback@globeandmail.com. If you want to write a letter to the editor, please forward to letters@globeandmail.com.
Comments