The bees are dying. It's a catastrophic situation. Ontario's environmental watchdog, Gord Miller, warned this week that the bee-pocalypse could set off an environmental and economic crisis. He blames a new class of pesticides, known as neonicotinoids, and wants the province to ban them. The bees are the canary in the coal mine, he warns, and the threat is "bigger than DDT." Many people are calling the bee die-off a second "Silent Spring."

"It has to stop. It just has to stop," Ontario beekeeper Tibor Szabo told Global News. He's lost more than 1,000 hives this year, and is joining a class-action suit the Ontario Beekeepers' Association has launched against the biggest makers of neonics.

The fate of the bees is the newest, biggest battle in the long-running war between the environmental movement and big agribusiness – with farmers and ordinary citizens caught in the middle. You can find scientists on both sides of the dispute. Even beekeepers themselves don't agree on the hazards of neonics.

Walter Zimmermann, for one, wants no part of the class-action suit. He has kept bees for 15 years (it was a hobby that grew out of control, he says) and has never had a problem. He's a former scientist with Environment Canada, and believes Ontario's beekeepers are largely to blame for their own woes because a lot of them are newcomers and don't manage their hives properly. "There's good science and then there's junk science, and the junk science aspect is being pushed by some of the media," he told me.

Alberta's beekeepers, which produce nearly half of Canada's honey, aren't joining the lawsuit either. They say the new seed treatments actually reduce the bees' exposure to harmful pesticides.

Unlike other pesticides, which are sprayed on crops, neonicotinoids are coated on seeds before planting. They were developed with the express purpose of reducing harm to bees and other animal life. But after pressure from environmental lobby groups, the European Union imposed a precautionary ban. The impact on some farmers has been devastating. In Britain and Germany, crops of oilseed rape (known here as canola) have been eaten up by flea beetles. Farmers have been forced to revert to the older pesticides, which are less effective and likely cause more harm to the environment.

There's no doubt that something is ailing the bees, or at least some of them. Ontario has been hit particularly hard by bee die-offs lately. But a lot of experts say the problem isn't neonics. In Australia, the bee population is stable even though neonics have been in use there for years. The Australian regulator recently reported that neonics are better for crops and the environment than the products they replaced.

So what's the problem elsewhere? It's complicated. "What's killing the bees is not a single factor," Ernesto Guzman, head of the Honey Bee Research Centre at the University of Guelph, testified before a Senate committee last February. He identifies the chief culprit as bee mites, followed by fungi, pesticides and climate change. Experts also cite poor hive management and loss of habitat caused by changes in land use. "If it was one factor, we would solve it relatively easily, but we have a number of factors," Dr. Guzman said.

This answer is unlikely to satisfy environmental conspiracy theorists, who would like to convince us that greedy multinationals are poisoning the bees in order to line the pockets of their shareholders. Nor will it do much to reassure the public, which is susceptible to scary bedtime stories.

Because of the variables cited by Dr. Guzman, bee research is hard to do, although one thing everyone agrees on is that we need more of it. In the meantime, you might want to find your way to Walter Zimmermann's tasting room. "This year, my hives did really well," the honey hobbyist says. "My goldenrod honey tastes like butterscotch."

Watchdog warns about use of neonicotinoid pesticides linked to bee deaths
October 7, 2014
Pesticides, pollination and the bees’ needs
July 27, 2014 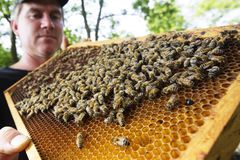