On being turfed out of the "Fright House," sorcerer Steve Bannon said, "I think they're going to try to moderate him [the President] … I think it'll be much more conventional."

The potbellied populist could be right. His snake oil helped take the United States' right-wing political fringe to dizzying heights. But its influence will now shrink.

For the forces of stability, it's been a heartening week. The white supremacists lynched themselves in Charlottesville, Va. Boston's massive counterprotest belittled them further. Donald Trump was disgraced through it all, as were the racists and political extremists and, in this country, Rebel Media, from which so many Canadian conservatives have suddenly run.

Read more: Trump's rebuke of hate groups in wake of Charlottesville violence decried as 'too little, too late'

At the White House, generals, globalists and traditional conservatives have pushed aside the Bannon radicals, winning the convulsive inner power struggle. Mr. Bannon's prediction of more normal fare to come gained credibility quickly with the decision by Mr. Trump, who has always advocated a withdrawal from Afghanistan, to follow the advice of his generals and stay in the fight and augment it.

One week does not a permanent shift make. But conventional conservatism, beaten down for so long by the Tea Party, Breitbart and Trump is making a resurgence. Mr. Trump's hostile takeover of the Republican Party is running aground. A lot of crazy things had to happen for the insurgents to win the election, and they did – not the least of which was the late-campaign intervention by former FBI director James Comey when Hillary Clinton had a sizable lead and was set to win more than just the popular vote.

In power, the insurgency lacks a chief executive who knows what he is doing. It lacks infrastructure and institutional loyalty. It lacks media support – not because of fake news, as Mr. Trump claims, but because of real news, which for him is bad news.

Hit hard by Charlottesville were far-right outlets that have supported Mr.Trump. With Fox News, whose support he desperately needs, Mr. Trump is losing ground as well. James Murdoch, CEO of parent company Twenty-First Century Fox, is stepping into the shoes of his father, Rupert, whose media empire is vast. The younger Murdoch is more moderate and progressive. He took grave exception to Mr. Trump's reaction to Charlottesville, making a million-dollar pledge to the Anti-Defamation League. Previously, he took a stand against the President's travel ban from Muslim-majority countries. Fox News has already been weakened by the resignations of key players accused of sexual harassment. James Murdoch is not about to turn it into a more balanced media vehicle like the traditional U.S. networks, but he is likely to move it in a more conventionally conservative direction.

Some feel Mr. Bannon will be able to exercise inordinate power from the outside as chairman (once again) of Breitbart News. But his power there can no way equate to losing a big seat at the White House table. He's not the only one of his ilk to be forced out. General John Kelly's appointment as chief of staff, another big win for traditional Republicans, has led to the exit or diminished status of several Bannonites. More departures are to come – to the point where the radicals will rarely have the President's ear. Their opposite, the generals, will have it. While military prominence in a White House is not normally something to cheer about, the pre-existing recklessness means the presence of Mr. Kelly, national-security adviser H.R. McMaster and Defense Secretary James Mattis is welcome.

The change in dynamic is good news from Ottawa's standpoint. The beggar-thy-neighbour Bannon crowd was filling Mr. Trump's head with nonsense such as the idea that NAFTA has been mainly responsible for lost jobs in the Rust Belt when in fact automation is to blame.

The danger for traditional Republicans is the possibility that the Bannon exit and the abandonment of populist pledges will trigger a loss of support among Mr. Trump's base. Given all the embarrassments and turmoil, that support has been holding up very well. But if Mr. Trump senses he is losing it, he will be inclined to bring back the people and policies that helped bring him the crown.

Kasich urges Trump to end staff chaos at White House and ‘settle it down’
August 20, 2017 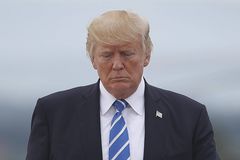