Brian Stewart is a former senior correspondent with CBC's The National and is a distinguished senior fellow at The Munk School of Global Affairs.

There are few manoeuvres more difficult to pull off – in military affairs, politics, and yes, broadcasting – than that of a fighting retreat. This is where the worst stumbles are made, strategies are jettisoned prematurely, and decisions are made in nervous haste.

Sounds a lot like the CBC in recent years as the Canadian media landscape grows ever more littered with its cancelled shows, discarded jobs, and abandoned mandates.

To many veteran CBC staffers a quickening retreat now risks turning into an all-out rout as more core functions of the broadcaster are tossed over the side with scant if any consultation.

Earlier this week, in an unprecedented protest, 40 CBC personalities accused management of conspiring to dump one of the core functions of the public broadcaster, the long-famous CBC Documentary Unit, out with the rest of the litter. This momentous step took almost all by surprise.

"Regrettably, time is not on our side," the head of English programming Heather Conway conceded when she addressed complaints that included the absence of consultation.

"I am genuinely sorry that the speed with which our financial challenges have to be dealt with has short-circuited a more comprehensive consultation with you individuals," she added, which just seemed to confirm, as most feared, that CBC management now operates in near-permanent crisis mode.

There is at CBC, it seems, little desire to demonize Ms. Conway, who is widely seen as a manager trying her best to direct the Corporations' headlong retreat across hostile political ground even as it absorbs one new budget shortfall and round of layoffs after another, along with loss of ad revenue and the disappearance of hockey.

Ottawa's latest round of cuts – $130-million this year – will eliminate 657 more jobs over the next two years, while hard pressed managers must somehow continue to scrape together enough programing to continue providing service in English and French, as well as eight aboriginal languages, across six time zones.

It's a monster job, unique in public broadcasting, and yet when it comes to funding of this service the CBC does not even come close to the average of $82 per inhabitant enjoyed across 18 western countries studied last year. The increasingly fragile CBC takes in 60 per cent less than that norm, or $33 per resident, barely enough to keep it third from bottom, just above New Zealand and the United States.

The harsh nature of this fiscal neglect is why one can find both sympathy for management at CBC and yet also a passionate belief that actions such as the liquidation of the Documentary Unit is foredoomed to become a ruinously ill-advised decision along the calamity of retreat.

It's hard to overestimate just how important the making of documentaries is to CBC, or how seminal they have been as an art form to this country.

Film historians have argued Canada even gave birth to the full length documentary form in 1921 when Robert Flaherty chronicled the life of an Inuit hunter in Nanook of the North, a silent work of such power it is still studied in film courses across the generations today.

This country has had many documentary makers, of course, and many excellent ones, but for well over a half-century CBC documentaries were known for a form of Muscular Journalism. They offered Canadians unique views into their extraordinary history, through peace and war, and insights into their current lives within this unimaginably vast nation. Across the world, CBC documentary makers have brought home inside accounts of revolutions, global conflicts, and the humanitarian crises that touched chords deep within us.

The CBC made series of enormous scale that clearly captured a country's imagination. Canada: A People's History won universal praise while exceeding the viewing levels of playoff hockey. It is still taught in schools today.

In recent years, even as television threatened to splinter into fragments of digital channels in the vortex world of 24/7 news, conflict and entertainment, television's documentaries were anchors to something more stable, solid.

"The documentary, as an art form, is the antidote to insularity and to black and white thinking. It embraces complexity, shadings, and humanity", wrote Mark Starowicz, CBC's respected head of documentaries.

Contrary to so many expectations, documentaries are exploding in popularity on television, in cinemas, art festivals, on Netflix, and especially among the young. The very hyperventilation of the age seems to put new premium on displaying truth.

Over the past 10 years, however, as if bucking a new wave, CBC has cut back original documentaries by 52 per cent (the lowest level in over 20 years) while slicing its doc budget to a quarter of its size.

Management at CBC insists they're not against docs, they just want more independent ones. The protesters, however, counter that 75 per cent of CBC output is already independent. They fear the next twist in this direction will wipe out one of the most creative and widely respected bodies in Canadian media.

Desperate times call for innovation, and so this weeks' plea to management is to reconsider any notion of eliminating the historic Documentary Unit, still widely seen as a core part of Canadian public broadcasting, while exploring new avenues of cooperation with the independents.

Activity in the documentary area should be a spur to new creativity. At least it would give the Corporation the first excited shudder of a possible comeback scenario to replace the dispiriting vision of endless retreat. Journalism to politics, Jack MacAndrew was a man of many hats
June 24, 2014 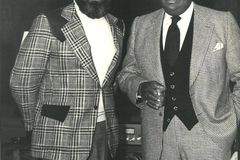