With Donald Trump's inauguration as president of the United States fast approaching, the strangest – even craziest – post-election transition in U.S. history is about to come to an end. This period has provided a clear demonstration of how unpredictable life with President Trump will be.

A president-elect typically uses the transition time to make cabinet choices and to study up on the issues he will soon confront, but keeps quiet on policy until he's been sworn into office. But Mr. Trump has only paid lip service to the hallowed principle that the United States has just one president at a time. Shortly after the election, he began to conduct his own foreign policy.

Globe editorial: A Trump presidency is looking more and more like the sum of all fears

Just a couple of weeks after becoming president-elect, Mr. Trump took to Twitter to suggest that the British government name Nigel Farage, who had led the successful Brexit campaign, as Britain's ambassador to the United States. Soon thereafter, Mr. Trump took a congratulatory call from Taiwanese President Tsai Ing-wen – a sharp departure from the "One China" policy that presidents, Democratic and Republican alike, have upheld for more than 40 years.

China strongly condemned the move – and Mr. Trump's subsequent tweets questioned U.S. commitment to the policy. Mr. Trump's foreign-policy meddling reached its apex – at least so far – in late December, when he tried to interfere with the decision by President Barack Obama's administration to abstain from voting on a UN Security Council resolution condemning Israel for continuing to build settlements in occupied Palestinian territories. Traditionally, the United States had vetoed such resolutions, though for some time now, administrations had taken the position that such settlements blocked progress on a two-state solution for the Israel-Palestine conflict.

Mr. Trump had already indicated that he wanted a closer relationship with the government of Israeli Prime Minister Benjamin Netanyahu, who backs the settlements. So he took it upon himself to call Egyptian President Abdel Fattah el-Sisi and urged him to delay bringing up the resolution (it was postponed for only a day). Mr. Trump also strongly criticized the Obama administration's decision not to veto the resolution. And he named as his ambassador to Israel his bankruptcy lawyer, a man with no foreign-policy experience, who is a fervent backer of the settlements.

Yet perhaps the weirdest elements of the transition have been the manifestations of Mr. Trump's apparent fondness for Russian President Vladimir Putin. Mr. Trump says that he's simply trying a new approach, after years of cold, if not hostile, U.S.-Russia relations. Perhaps. Journalists have been trying to track down the origin of Mr. Trump's softness toward Mr. Putin. A small eruption occurred over news reports on Jan. 10 that the intelligence agencies recently informed Mr. Trump and Mr. Obama of uncorroborated allegations that Russian intelligence agencies have compromising information on Mr. Trump's behaviour. While the validity of these claims remains very much in question, it's clear that the subject of Mr. Trump's relationship with Mr. Putin isn't going away.

In any case, Mr. Trump's attitude toward Mr. Putin has worrisome implications. Does it mean that Mr. Trump will consent to Mr. Putin's ambition to dominate Ukraine? How would Mr. Trump – who questioned the value of the North Atlantic Treaty Organization during the campaign – react if Mr. Putin committed aggression against one of the Baltic states, NATO allies toward which he's already made threatening gestures. The fundamental question is: Is Mr. Putin playing Mr. Trump?

One manifestation of Mr. Trump's predilection for giving Mr. Putin the benefit of the doubt was in his rejection of the finding of 17 U.S. intelligence agencies, issued last October, that Russia was meddling in the election. After the election, the intelligence agencies described the actions Russia had taken: hacking into the e-mail accounts of the Democratic National Committee and of Hillary Clinton's campaign chairman; arranging for embarrassing e-mails to be made public through Wikileaks; and purveying "fake news." Russia's goal, the agencies declared, had been to damage Ms. Clinton's campaign. The implication that Russia may have helped him win was intolerable to Mr. Trump. Angered by the prospect that anyone would consider his election invalid – which no serious person alleged – he ratcheted up his attacks on the CIA, the FBI and the Office of the Director of National Intelligence, (which co-ordinates the findings of the various intelligence agencies).

Numerous members of Congress from both parties declared that it was unjust for Mr. Trump to malign the entire intelligence community – dedicated government workers, many of whom take on highly dangerous assignments. Moreover, some commented, it was unwise: Not only would Mr. Trump need to rely on these agencies in future crises; they're filled with skilled infighters who know how to use strategic leaks.

In time, Trump's disdainful tweets about the intelligence agencies became a crisis for him. When National Intelligence Director James Clapper testified in an open hearing of the Senate Armed Services Committee on Dec. 6, including on the finding that Mr. Putin himself had directed the attempt to affect the U.S. election, his testimony met with bipartisan approval.

Mr. Trump's habit of tweeting at all hours on all manner of subjects, has those in Washington,

including Republicans, on edge. The most worrisome aspect of this strangest of transitions is what it foretells about what will happen when he gains the full power of the presidency. 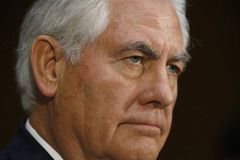 Opinion
Globe editorial: A Trump presidency is looking more and more like the sum of all fears
January 11, 2017 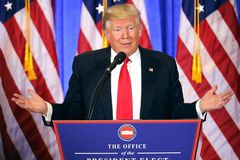