I do enjoy a spot of quinoa now and then. The grain-like seed from the Andes makes a nice backdrop to lamb or fish, and can form a pleasant, if very rich, salad if you augment it with bacon and warm greens.

I am far from alone. Twenty years ago, quinoa was pretty much unknown. Now, it's in everyone's cafeteria. Its price is going through the roof.

And that, in the confused minds of Western foodies, is somehow a bad thing. This week saw a flurry of headlines suggesting that the quinoa boom, unlike any other commodity boom, must somehow be bad for the people on the producing end. "The more you love quinoa," The Globe and Mail headline read, "the more you hurt Peruvians and Bolivians." A report in the Guardian chronicled "the unpalatable truth about quinoa," which is that "poor Bolivians can no longer afford their staple grain."

There is nothing quite like food to make us lose all sense of perspective and reason. Behind the killer-quinoa meme you'll find three modern fallacies of food.

First is the idea that success must be bad for the poor. Surely, we think, the quinoa-eating people of the Andes are going to be hurt if they can no longer afford their own crop.

The people of the Altiplano are indeed among the poorest in the Americas. But their economy is almost entirely agrarian. They are sellers – farmers or farm workers seeking the highest price and wage. The quinoa price rise is the greatest thing that has happened to them. And it is a deliberate strategy: Quinoa had all but died out as a staple in Bolivia, replaced by beans and potatoes, until farmers began planting it in the 1980s with exports to North America in mind.

Starting in 1987, they tapped an export crop that raised living standards, lowered poverty and allowed farmers to move away from the region's other profitable export crop, cocaine.

"Quinoa fetches a guaranteed high price affording farmers economic stability," Emma Banks of the Andean Information Network observes. This has given the Andean farmers – formerly one of the most exploited groups in Latin America – new political power, allowing them to win land rights and ecological protection. So when one ecological blog argues that quinoa's "increase in popularity could have negative long-term effects for the farmers that grow it," what could it mean?

There is the second fallacy: That people are better off consuming food grown near them. The "locavore" ideology holds that Montrealers should eat Quebec potatoes and people in La Paz should consume quinoa – and that if they don't, because their success has made it expensive, they should be forced to eat some other local crop.

But why wouldn't they use the rising incomes to purchase imported beans, rice, cheese and chicken? In fact, this is exactly what they do. Food is expensive everywhere this year; Peruvians and Bolivians are economizing.

Imported food is often nutritionally better, more affordable, better for the economic development of its producing regions, and less ecologically damaging (because growing in cold countries requires carbon-heavy storage and heating). Peruvians and Bolivians were not better off in the days when they were consuming their own produce – in fact, the Andes region had alarmingly high rates of stunted growth among children, a key indicator of undernourishment. Food protectionism was bad for the poor. So why would we relegate them to a life that was hurting them and that they didn't enjoy?

That leads to the third fallacy of food: Authenticity. The Incas ate quinoa centuries ago, so their descendants should. Now the whole world wants to eat their healthy crop, and they're turning to chicken. Doesn't that somehow make them less authentically Andean?

I have relatives on the Nova Scotian side of my family who can remember when lobster was strictly for the dirt-poor – in the eyes of better-off maritimers, it was akin to eating insects. Then the postwar explosion of surf-n-turf dining priced this high-protein food out of their reach. They ate lasagna, pork chops, and macaroni and cheese instead, because the lobster boom had made them less poor. Does anyone think this made them worse off, or less authentically Nova Scotian?

Today they're eating quinoa – which tastes pretty good with lobster, as it happens. Being poor may be authentic, but success feels better.

The more you love quinoa, the more you hurt Peruvians and Bolivians
January 16, 2013 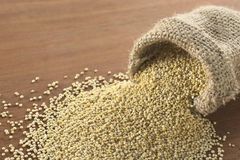 What are the healthiest foods for gaining weight?
November 5, 2012