Ontario Premier Doug Ford fell into just such a semantic trap when, as The Globe and Mail reported this week, he granted exclusive access to business executives in exchange for large donations to one of his favourite charities.

On its surface, the idea of Mr. Ford using his celebrity to raise funds for a worthy cause has a noble sheen.

He did so at the annual Toronto Police Chief’s Gala last November, where attendees were able to buy an “intimate private dinner” with the Premier for $20,000 a pop. All the money went to Toronto Victims Services, a charity that provides support for the victims of crimes and family tragedies.

The winning bidders paid for the right to take 10 guests to a Toronto restaurant to dine with Mr. Ford. In all, the packages raised $101,000.

But as generous as that sum is and as worthy the cause, the perception of Mr. Ford selling exclusive access to himself cannot be shaken.

Two companies that paid to dine with Mr. Ford – OnX Enterprise Solutions and All Seniors Care Living Centres – were lobbying to do business with the province at the time.

In another case, the real estate developer Sam Mizrahi bought a dinner with Mr. Ford on Jan. 29. The next day, he e-mailed the Premier’s then-chief of staff to ask for a meeting regarding, among other things, the redevelopment of Ontario Place, which had only just been announced.

The stench of impropriety is hard to miss, yet none of what occurred is illegal. Because the gala was a charity fundraiser, Ontario’s rules on political fundraising don’t apply.

Those laws prohibit corporations and unions from donating to political parties, and they limit annual individual donations, too.

The rules were brought in to end a long period during which previous Ontario governments, notably the Liberals under premiers Dalton McGuinty and Kathleen Wynne, brazenly traded access to the premier and to cabinet ministers in exchange for hefty donations from people who had a financial interest in the government’s doings.

This is not exactly that. Not a penny raised at the Police Chief’s Gala went to Mr. Ford’s party, the Ontario Progressive Conservatives. Nor did Mr. Ford benefit financially, other than getting a few nice restaurant meals.

And yet, this is still sort of that. Mr. Ford has restarted the practice of moneyed people and corporations being able to buy private access to the Premier, if they pony up funds at a high-end gala. (The price of a table at this year’s gala, taking place Thursday, is $3,750.)

No one should begrudge Mr. Ford’s desire to help out a charity that he feels is important. But this is not the same as, for example, a politician volunteering for the dunk tank at a community fundraising event and letting people pay $5 for the pleasure of trying to plunge him into cold water.

This is Ontario’s leading public official engaging in a potential quid pro quo with private interests. They give money to something he supports; he gives them a private meeting.

It doesn’t matter that Mr. Ford doesn’t benefit personally. He still shouldn’t do it. He is wriggling through a legal loophole, one that should be closed rather than exploited.

But Mr. Ford has long proven to be a Premier who doesn’t grasp the significance of the role he plays. He showed as much when, early in his tenure, he unsuccessfully tried to vault an old and unqualified friend into the job of commissioner of the Ontario Provincial Police.

He doesn’t seem to get that he is creating the appearance of conflict of interest, or the outright fact of it, and sowing doubt in the public’s mind about the ethical nature of his dealings with businesses that lobby his government.

And he doesn’t seem able to learn. All he does is reiterate his claim, as a spokesperson for him did this week, that “no one can buy or unduly influence Doug Ford.”

Mr. Ford is planning to attend Thursday’s gala. There, he will once again offer himself and the time for a private dinner, to the highest bidder.

He should ask himself: Would anyone pay $20,000 to dine with him if he were still just a private businessman?

To ask the question is to answer it. 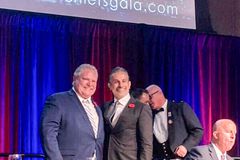 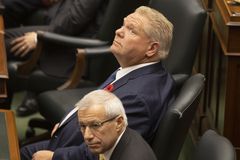 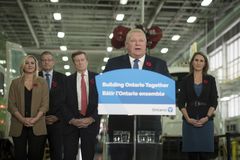