Prime Minister Justin Trudeau pulled off a remarkable feat of political dexterity in the House of Commons this week. He somehow managed to be both completely honest and completely disingenuous in his defence of the cash-for-access fundraising empire he is building in Ottawa.

Mr. Trudeau was telling the truth when he said on Wednesday that the law governing political fundraising at the federal level is among the toughest such laws in the country. As he pointed out, "The federal system has some of the strictest fundraising rules and expectations of any jurisdiction in this country. There are still jurisdictions in Canada that have no limits on personal donations, that allow corporations, that allow developers, that allow unions to donate. We have a system that has very strict limits on only personal donations, and total transparency."

He's right. In many significant ways, the decade-old federal rules are a model for the rest of Canada: no corporate and union donations, and a $1,525 annual personal limit to political parties. The same limit applies to donations to candidates and to constituency associations.

British Columbia, to which the Prime Minister pointedly referred in his statement, allows unlimited donations from corporations, unions and individuals. B.C. cabinet ministers and the premier regularly meet in small gatherings with wealthy donors – many of whom do business with the government, or would like to – who pay five-figure sums for access to the levers of power.

In Ontario, where corporate and union donations are still allowed, the long-ruling Liberal Party was caught giving cabinet ministers fundraising quotas and ordering them to seek donations from businesses and organizations that are overseen by their departments. Premier Kathleen Wynne has introduced reforms that should take effect in the new year, and which she (falsely) touts as the end of cash-for-access fundraising.

Alberta was a similar free-for-all until the arrival last year of Rachel Notley's surprise NDP government. Ms. Notley's first move was to ban the corporate and union donations that had nourished the Progressive Conservative Party for decades, although she has kept the personal donation limit fairly high.

So yes, Ottawa has led the way. And yet the conflicts of interest that Mr. Trudeau suggests are so egregious in B.C., and which became so distasteful in Ontario that Premier Wynne was forced to bring in reforms, still exist at the federal level, all thanks to Mr. Trudeau.

The most obvious examples of the Trudeau government's pay-to-play involve Finance Minister Bill Morneau, who is currently doing prebudget consultations. He was the star attraction this month at a small and exclusive, $1,500-a-person Liberal Party fundraising event at the home of a wealthy Halifax developer. He will again dominate the marquee at an exclusive, $500-a-person event in a private Toronto home next month, and for which tickets are being sold by the chairman of a drug firm that is actively lobbying Mr. Morneau's office.

Mr. Trudeau hides behind the federal fundraising law when defending this indefensible practice. He repeats over and over that the federal rules are the toughest in the land. He boasts that his government holds a lot of town-hall meetings, and other such irrelevant nonsense.

But the fact of the matter is that the Liberals are using their status as the governing party to raise funds by trading access to prominent cabinet ministers for large sums of cash. That is a conflict of interest in Ottawa just as much as it is in B.C., Ontario and other jurisdictions.

Does Mr. Trudeau, the avowed champion of the middle-class family, really believe that the average couple can afford $3,000 to share a cocktail with the Minister of Finance in the quiet confines of a well-appointed living room? Does he truly not see how allowing Mr. Morneau to do this amounts to preferential access in exchange for large donations, something he explicitly prohibits in the cabinet rules he announced to great fanfare after taking power last November?

Of course not. He knows it's wrong, but he prefers to duck behind the camouflage of an inadequate law, the way Ms. Wynne did for far too long.

It should be apparent by now that laws that are touted by politicians as being a cure for the epidemic of cash-for-access fundraising in our country are no such thing. For example, Ms. Wynne's proposed reform will ban corporate and union donations and reduce the maximum personal donation to a political party to $1,200 per year. As well, the law will prohibit MPPs of any stripe from attending political fundraising events.

But Ontario cabinet ministers and their staff will still be able to phone wealthy donors and ask for $1,200 – an exchange that is arguably more intimate than any small gathering with other people present in the room. And political staffers will still be able to attend fundraisers. It doesn't require the physical presence of a cabinet minister for an exchange of cash for access to occur.

There is only one way of ending preferential access for wealthy donors, and that is to lower the personal donation limit to $100, as Quebec has done. Bring the amounts down to such a low level that cash-for-access becomes too inefficient to bother with, and problem solved. Game over.

Mr. Trudeau has proved that well-meaning cabinet rules and laws do nothing to prevent ministers from placing themselves in obvious conflicts of interest. By trying to hide behind Ottawa's relatively tough regime, he has made it clear that it is not working. The federal government has led the way on political finance reform. Mr. Trudeau should finish the job and lower the donation limit to $100. 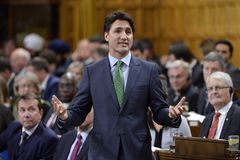