It seems as if the world has broken out in mass, government-threatening protests: Caracas, Ankara, Bangkok and Kiev are among the capitals that have erupted in flames and clouds of tear gas in recent weeks.

But these aren't the democracy protests we've known during the past two and a half decades. Two things distinguish them:

First, they are mass uprisings not against dictatorships but against governments that came to power through reasonably fair elections in existing (if young) democracies, but then turned against the principles of democracy – by suppressing media and opposition forces, by rewriting laws and by altering constitutions to partisan advantage. These people are protesting against the rotten fruits of democracy.

Second, these protesters are generally not interested in using democratic politics as their instrument of change. New political parties and candidates aren't emerging from these movements, whose members often see representative democracy as a sideshow. They're not anti-democratic, but they've come to believe that the protests themselves are more democratic than elections.

I've witnessed this in all the protests I've attended recently. In Kiev, during the lull between outbreaks of mad violence in the city's haphazard Independence Square protest camp, I spent time asking dozens of protesters who they wanted to run Ukraine. Assuming their mission to force the resignation of President Viktor Yanukovych was a success, who were they backing as a successor?

Most had to spend some time thinking about it. A few named Yulia Tymoshenko, the imprisoned onetime opposition leader, famous for her blond plaits. Some had no thought on this at all. Most others named one of the three opposition-party leaders, liberal or right-wing nationalist, who have appeared onstage regularly during the protests. But almost all of that group seemed surprised by the question: This wasn't why they were here, or what they were thinking about.

I heard similar responses in Istanbul's Gezi Park protests last summer: While the young people denouncing President Recep Tayyip Erdogan's excesses were politically sophisticated, they weren't enthusiastic about the main secular opposition party and generally hadn't put much thought to an alternative: This was about ending injustices, not about finding new leaders.

Cairo in 2011 was the first time I saw this effect so dramatically: The broadly liberal, secular protesters who led the uprising against dictator Hosni Mubarak failed dramatically to produce a viable candidate or even a strongly identifiable party; the most admired figures from those protests all chose not to enter elected politics – and I spoke to many protesters who seemed not to be terribly bothered by this. I've seen this same disengagement from the electoral system in many recent protests – in New York, I didn't meet many Occupy Wall Street protesters who cared about Congress or the presidency.

This disengagement may be understandable, but its results can be tragic. In Egypt, it meant that the Muslim Brotherhood rushed in to fill the political vacuum: When elections came in 2012, Islamist president Mohammed Morsi won with just 51.7 per cent of the vote. A stronger interest in running for office would almost certainly have produced a secular president.

And then, in 2013, secular Egyptians held mass protests against Mr. Morsi – who had, like Mr. Yanukovych, done menacing things to the democratic system and his opponents. Once again, the protesters did not seek to put someone in office. They settled, with surprising placidity, for a military coup.

This all might sound like a paradox: Here are people in countries that have only recently fought for democracy using the word "revolution" to describe protests against the governments produced by that very democracy.

This is exactly the paradox that puzzled Robert Dahl, the great political scientist who died last week at 98. "The paradox vanishes," he wrote in his classic After the Revolution, "if we realize that because democracy has never been fully achieved, it has always been and is now potentially a revolutionary doctrine. For every system purporting to be democratic is vulnerable to the charge that it is not democratic enough, or not 'really' or fully democratic."

In other words, sometimes the excesses of fairly elected leaders require extra-democratic responses. This has been a pattern in many countries: Protest for democracy, then protest against the results of that democracy. Fair enough, as there have always been more Robespierres than George Washingtons. But at some point, you need to find someone fresh to step up to the plate – or someone far worse will fill the vacuum.

Stuck between the West and Putin, Yanukovych’s moment of truth has arrived Subscriber content
May 11, 2018 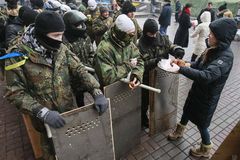 Opinion
How ‘entrepreneur’ stopped being a European word
May 11, 2018

Opinion
How the West dropped the ball on Ukraine
May 11, 2018