This week the federal government announced that it had sold Macdonald House at One Grosvenor Square, which since 1962 has been Canada's diplomatic home in London, to a developer from India for $530-million. Canada's High Commission and consulate will be moved into a new building attached to Canada House, the stately building in Trafalgar Square that is better known to most Canadians. Mel Cappe served as High Commissioner to London from 2002 to 2006.

Many people have felt that Grosvenor Square was the American Square. Busts of Roosevelt and full statue of Eisenhower. Even after the U.S. Embassy moves to Battersea in south London next year, it will be the American Square. What is now called Macdonald House and the Canadian Chancery in Grosvenor Square was until 1961 the U.S. embassy. The balcony off my office was where Joe Kennedy gave a speech in 1939 defending Hitler! Not an auspicious piece of history.

Canada House is indeed the traditional home of Canada in London. Vincent Massey, when he was High Commissioner, ran a pub in the basement during the Second World War for Canadian servicemen. Just about every Canadian who served in Europe went through the basement of Canada House. Down the block is the Grand Trunk Railway building with Canadian National Railways on the front with crests of all the provinces. Across the street is the old Canadian Pacific building.

Now we will have a worthy building in Trafalgar Square to serve Canada. It was never a problem to get the great and the good of London, from Whitehall, Westminster and The City, into Canada House. Out to Mayfair and Grosvenor Square was also not a problem, but people couldn't just pop in as they can at Canada House. Last week when I was in London, I found that on the new building attached to Canada House at 2-4 Cockspur there is a battery of Canadian flags. Made me proud.

The building at Grosvenor Square had only two redeeming features. First, it was called Macdonald House and named after Sir John A. Second, the rent owed to Gerry Grosvenor, the Duke of Westminster, was £100 … a year! This was for 250 offices, the Official Residence and six flats on the top floor. And there were only 936 years left on the lease. That's why we got $530 million for the building.

But it will need to be totally gutted. The shell and bones are good. But the interior had been neglected for decades. Carpeting down the circular staircase up to the High Commissioner's office was literally held together with duct tape! There hadn't been a coat of paint in years. The walls were tired and the offices dilapidated. Not a good presentation of Canada to visitors. Of course the Department of Foreign Affairs didn't want to invest in it, knowing that some day it would be sold. Good thing that day has arrived.

The only hesitation is that I hope the Department and the Government understands the importance of Canada having an official residence worthy of a G7 country – a residence with excellent representational space and close enough to Whitehall, Westminster and the City to attract the great and the good to meet visiting Ministers, MPs and business people. If we want to be a player in international affairs, then we have to present like one.

I look forward to visiting Canada in London after the renovations and the move… and an upscale official residence for the High Commissioner to present Canada well in one of the world's leading cities. 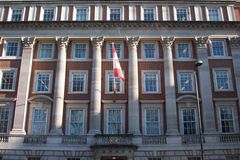