Dr. André Gerolymatos is professor and director of the Stavros Niarchos Foundation Centre for Hellenic Studies at Simon Fraser University.

The Greeks held their breath and jumped off the precipice. The Greek debt crisis, and the outcome of a No vote in the referendum, is a perfect example of politics trumping economics.

Twenty-two years ago, the European Community transformed into the European Union and the euro zone. After centuries of conflict, the Europeans established an entity in 1993 that many believed would herald a future federal European state.

The critical flaw of this vision was that they produced a currency without a central bank controlled by a supranational finance ministry. The result was sustained growth for some EU states and debt for others. One of the terms of the Maastricht Treaty, which spawned the euro zone, was to limit national debt to 60 per cent of GDP and annual deficits to no greater than 3 per cent of GDP. Another obligation was to keep inflation to 1.5 per cent points higher than the average of the three best performing EU states. These conditions were certainly ambitious, but – as underscored by the current crisis – unrealistic.

Few euro zone countries could achieve, let alone sustain, these requirements so they resorted to "cooking the books." Essentially, these states sold their debt to third-party investors. Greece, Portugal, Spain, Italy and Ireland masked their debts to keep the illusion of solvency until the 2008 economic crisis eventually exposed their economic juggling. Greece was the first to collapse in 2009, and the first failure of the euro zone experiment. Five years of remorseless austerity has done little for the Greek economy. The only growth has been the debt.

Since 2010, the International Monetary Fund, European governments and the European Central Bank have lent 252 billion euros to Greece. (The debt has risen to 343 billion euros with interest.) Over the same period, 232.9 billion euros has been spent on debt payments, stabilizing banks and "sweeteners" for speculators in order to get them to accept the 2012 debt restructuring. In effect, less than 10 per cent of the money went to the Greek economy. As a result, the Greek debt has grown from 133 per cent of GDP in 2010 to 174 per cent today. The IMF reported Thursday that Greece needs an infusion of 50 billion euros over the next three years to stabilize its economy.

Debt restructuring is not new in European history. In 1953, the former Second World War allies, including Greece, at the London Conference wrote off 50 per cent of West Germany's $30-billion (U.S.) debt from the First and Second World Wars. More generously, the allies allowed the Germans to make payments for the remaining debt over a 30-year period out of trade surpluses. In effect, West Germany made its payments using revenue it actually earned, rather than being forced to resort to new borrowing, as is the case of Greece. At the time of the London Conference, Germany's debt was 25 per cent of GDP. Contrast that to Greece, at 174 per cent, or even Italy, Spain, Portugal and Ireland, which are well over 100 per cent of GDP. Today, Greeks wonder why the Europeans cannot extend similar equitable treatment toward their country.

The European Central Bank and the European Commission declined to consider restructuring the unsustainable Greek burden, mostly under German pressure. The IMF, however, will only participate in a future loan if there is a reduction of the Greek debt. The German government refuses, partly out of historical amnesia and partly because it fears a backlash from its voters. But a Greek default means that no loans will ever be paid.

Perhaps the current EU governments are loath to bail out Syriza, the radical left-wing Greek government, for fear that such a move may encourage the election of similar radical regimes in Europe. Certainly, Prime Minister Alexis Tsipras's government played to these fears and quickly lost the trust of its negotiating counterparts. Indeed, they went out of their way to antagonize the EU finance ministers – whether out of inexperience or a deliberate negotiating tactic remains an open question.

Remarkably, the demands of the Europeans and the Greek counterproposals of were not that far apart. In either case, the Greek people would face continued austerity. Euro zone ministers now confront the choice of whether to negotiate with Mr. Tsipras's government and hand them a significant victory, thus inspiring the radical left in the rest of Europe. The alternative is to remove Greece from the euro zone and risk Greece becoming a failed state almost overnight.

The spiral of economic desolation leading to a humanitarian crisis will begin Tuesday, when Greek banks run out of money. Tourists are cancelling reservations, adding to the acceleration of financial morbidity.

Can Berlin and Brussels afford to have a shattered country on Europe's southern flank? What happens next will determine whether the euro zone is an indestructible union, or one that will cast off recalcitrant members and thus forfeit the unity of Europe. 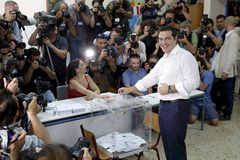 Morning after historic 'no' to austerity vote: Greeks proud of their defiance, toughness
July 6, 2015
Follow us on Twitter @globedebate Opens in a new window
Report an error
Due to technical reasons, we have temporarily removed commenting from our articles. We hope to have this fixed soon. Thank you for your patience. If you are looking to give feedback on our new site, please send it along to feedback@globeandmail.com. If you want to write a letter to the editor, please forward to letters@globeandmail.com.
Comments