Unbeknownst to those watching the Toronto Maple Leafs on television, each time there is a break in the game, a troupe of beautiful young women take to the rink wearing tight, low-cut hockey sweaters, leggings and leg warmers, and shovel snow from the ice. They are called the "Ice Girls." While they do perform a practical function, these women, with their body-hugging outfits and perfectly styled hair bouncing over their shoulders, are clearly not there because of their shovelling skills.

The NHL has had "Ice Girls" since 2001, when the New York Islanders became the first team to put together an all-female ice-clearing crew. Since then, numerous other teams have followed suit – often dressing the women in hot pants and midriff-baring tops. The Toronto Maple Leafs introduced their squad in 2014.

It is mystifying that an organization such as the Leafs would continue with such an outdated practice that objectifies women, considering the current climate. After months of revelations about sexual abuses allegedly perpetrated by powerful men, the #MeToo movement has prompted serious reflection on sexism in practically every corner of our culture from show business to politics. What about hockey?

Throughout the Leafs' long history, they never previously relied on such cheap tactics to draw fans. Thanks to the steadfast support of fans, the team achieved a remarkable 13 straight sold-out seasons, only breaking their streak in 2015 (coincidentally just months after the introduction of the "Ice Girls"). With one of the strongest fan bases in the entire NHL, the Leafs don't need to resort to turning women into eye candy.

Dressing women in tight clothing and parading them around the ice in the Air Canada Centre is insulting to the Maple Leafs' fan base, which is 33 per cent female. It's also insulting to the "Ice Girls" themselves, who are athletes in their own right – a combination of figure skaters and hockey players. Why aren't they given a chance to showcase their skills rather than just their curves?

Let's face it: Most of the time, the Maple Leafs' "Ice Girls" have much higher visibility than the athletes who play in the Canadian Women's Hockey League (CWHL). These professional female hockey players are some of the same women, incidentally, who are competing in Pyeongchang right now in the hope of winning Canada's fifth consecutive Olympic gold medal. They're good. Really good. And while the Toronto Maple Leafs support the CWHL with the odd tweet, the odd cross-promotional event and by hosting the All-Star game at the ACC in April, the team's decision to use provocatively-clothed women to clean the ice undermines the perception of women as professional hockey players.

By continuing to objectify women in this way, Maple Leaf Sports & Entertainment (MLSE), which owns the Toronto Maple Leafs, is putting itself in the kind of position that many companies, political parties and film production companies are trying desperately to extract themselves from right now.

What message is MLSE sending to hockey-loving girls in the stands who aren't yet part of the #MeToo movement? That the only way they can aspire to skate on the ice at the Air Canada Centre is if they look good in a form-fitting jersey? Seeing such outdated attitudes prevail makes me wonder how many of those girls will be saying #MeToo themselves in a few years.

Incidentally, the New York Islanders, the team that introduced the "Ice Girls" concept to the NHL in the first place, abolished their all-female squad in 2015. Instead, the team brought in a co-ed crew to scrape the ice and dressed them all in track suits. When asked what prompted the change, a team official said the move was made at the request of the team's fans.

The Maple Leafs should get with the times and stop underestimating their fans – especially considering Toronto's deep and rich history with the sport of hockey (notwithstanding the team's unfortunate performance in the 2014-15 season.)

I am highly confident that if a troupe of men and women in Maple Leafs warm-up suits were deployed to scrape the ice, male fans would not stop buying tickets. What's more, the team would make the female component of its fan base feel valued, rather than objectified. It would be a win-win situation. And what team can resist the win?

The Argos aren’t worth much. But there’s still a logic to MLSE’s football play
Subscriber content
December 14, 2017 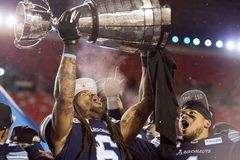