To be clear, I know next to zero about the technical intricacies of stealing a Boeing 777. And nearly a week after Malaysia Airlines flight 370 and all 239 people aboard vanished in the early morning sky over the South China Sea, a wide variety of outcomes still seem possible. But now that the official search has turned to the theory that the jet was purposefully redirected, rather than accidentally crashed, I'm suddenly leading the office pool. I've been trying to get that theory out of my head since last weekend.

This crazy conspiracy theory was based on little more than could be gleaned from Twitter and the news wires, although the relevant governments didn't seem to have much more information than that. In the beginning, it was as simple as this: The plane is missing and they haven't found a crash site yet. What are the other possibilities?

For many, the first thoughts were of terrorism, an early angle pursued by media and authorities. Stolen passports were investigated. "I'm not afraid of the word terrorism," said Sean Hannity of Fox News. But this never smelled like real terrorism, which is designed to accomplish its goals through fear. There was no easily gleaned symbolic value to targeting a flight between Kuala Lumpur and Beijing, and no one quickly or credibly stepped up to take credit.

The theory first started to get interesting shortly afterward, when it emerged that the pilot of the missing Boeing was a hardcore flight simulator geek. Could his interest have been a factor? Might he have turned off the jet's transponder? And could apparent discrepancies in his co-pilot's professional conduct have made them susceptible to blackmail or a concerted hijacking?

It was intriguing, but any number of scenarios still seemed more likely. Surely crash evidence would turn up, and a couple of times over the course of the week, it looked like it had – but still we have no wreckage.

The moment when the crazy theory started to tingle was when Malaysian officials divulged that military radar (not the civilian version that normally tracks commercial flights) had picked up an unidentified plane on a trajectory that would suggest MH370 had turned around and flown back west across the Malaysian peninsula before disappearing over the Strait of Malacca.

The Strait of Malacca has been one of the world's most dangerous shipping lanes for centuries, because its geography makes it an ideal chokepoint for piracy. An airliner is a different kind of ship altogether, but could this be a coincidence? "I keep waiting for someone to tell us if this Malaysian thing is actually an audacious theft," I wrote Tuesday in an online conversation with friends, after outlining the idea to coworkers.

Odd details kept coming in. Family said they could still make the passengers' phones ring. The engines had continued to transmit data for hours after vanishing.

On Wednesday, the notion that the plane might still be intact was still being dismissed as one of a number of crazy conspiracy theories. But by Thursday, reputable publications were taking it seriously, and by Friday morning, it had become a leading theory, as investigators searched the Andaman Sea and Bay of Bengal, well west of Malaysia. "What we can say is we are looking at sabotage, with hijack still on the cards," a Malaysian official told Reuters.

It's nice to be leading the office pool, but most of this is still entirely in the realm of conjecture. It might make a clever movie script one day. There are way too many unanswered questions. Wreckage could be found at any minute; new evidence could take us in an entirely different direction. Besides, in a jet theft, how would pilots or hijackers have eventually turned off the engine data transmissions? What kind of market exists for a stolen jet or its serial-numbered parts? How would the passengers and crew have been subdued, and where are they now?

Not the least of the questions is where a stolen 777 could land without being flagged. A remote strip with no witnesses? Or somewhere it could blend in? (Would anyone but controllers have noticed a Malaysian jet landing before dawn in Sumatra?)

Like so much else, just crazy conspiracy theories. For now, that's about all we have.

Guy Nicholson is deputy editor in The Globe and Mail's commentary section.

Editor's note: The pilot of MH370 was interested in flight simulators. Apparent conduct discrepancies belonged to his co-pilot. 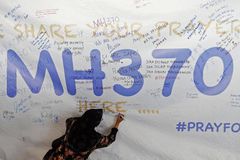