When Mary Barra was named chief executive officer of General Motors in early December, becoming the first woman to head a major U.S. auto maker, it seemed to many to be a milestone in women's struggle for equal rights and opportunities. But, in a climate in which, as Catalyst, the feminist glass-ceiling watchdog, points out, just 4.2 per cent of U.S. Fortune 500 CEOs are women, is Ms. Barra's promotion really a victory?

One way to answer that question is to consider who is doing the judging. In the United States, by one count, two-thirds of professional journalists are men, and men account for almost 90 per cent of bylines in economics and business reporting in traditional news media. In fact, the reflexive worldview of male-dominated business-news coverage invalidates all talk of a victory, whether for Ms. Barra or for the rest of us – including impressionable 15-year-old girls seeking role models and a message of empowerment.

Feminist analysts of language and media in the 1970s, notably critic Dale Spender, examined how language is used to deny women credit, power and agency when their successes are noted. That critique remains valid today.

Many news stories about female CEOs and other high-achieving women are coded with a set of reliable clichés: They lucked into their new roles (and thus do not deserve them), inherited them from male relatives or spouses (and thus do not really hold the reins of power) or will not be there for long. If all else fails, coverage concentrates so narrowly on gender that a woman's very leadership is weakened.

These clichés not only undermine successful women's reputations; in the case of CEOs, they also reduce their value to their companies. And all of these clichés were reproduced in the coverage of Ms. Barra's appointment at GM.

For example, CNN covered the story by referring to Ms. Barra's "knack for climbing the corporate ladder" – a phrase with some suggestive undertones, and one that would never be used with a man at the top, for whom hard work, talent, ambition and dedication presumably constitute more than a "knack." It concluded by suggesting that the new CEO will have succeeded when people no longer call her "car girl" but "boss" – although the report offers no evidence that anyone is currently calling her "car girl" rather than "boss."

Likewise, The New York Times led with Ms. Barra's father, and its headline suggested that she was "born to" her role, as if ambition and hard work had nothing to do with her ascent. It notes the car her husband drives and describes her as "soft-spoken." And it includes an excruciating quote from her predecessor, Daniel Akerson: "Mary was picked for her talent, not her gender." Promoting Ms. Barra, he goes on to say, "was almost like watching your daughter graduate from college."

Then there is the "Potemkin CEO" approach, which implicitly assumes that powerful men would never really choose a woman to lead an important institution. According to this cliché, Ms. Barra's promotion must be a public-relations ploy, with men retaining the real power behind the façade. So we get this headline from Fortune magazine: "Is GM's Board Setting Up Mary Barra To Fail As New CEO?" The article goes on to explain that being surrounded by male rivals may fatally weaken her, as if male CEOs are not also surrounded by would-be rivals.

Perhaps that is because she really is just a lady first, not a manager. An interview in the Times business section manages to focus the entire discussion on how things have changed for women at GM, rather than on what Ms. Barra intends to change at GM, or even on how things have changed in the car industry – surely an important question. The interviewer even asks at the end whether her husband is a GM employee.

With coverage like this, news becomes more than news; it becomes a real-world outcome that negatively affects a company's bottom line. Why would a major corporation – especially one like GM, which suffered a serious crisis that led to a massive government bailout in 2008 – risk appointing leaders, no matter how talented, who are bound to generate devaluing news coverage such as this?

I cannot fathom why serious journalists commit such egregious breaches of basic professional norms of fairness and impartiality. When they do, they are performing the role of guard dogs of an endangered patriarchy, defending and thus strengthening the glass ceiling.

Naomi Wolf is author, most recently, of Vagina: A New Biography. 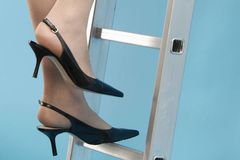