Let me see if I have this right. The interim Liberal leader is a former New Democrat. A leading contender for the NDP leadership is a former Liberal. But, somehow, there's a cultural gulf that stops progressives working together and the timing isn't good.

Except the timing has never been better to realign federal politics, which has been in flux since the Liberals last won Quebec in 1980. Today, Quebeckers have a majority of federalist MPs for the first time since 1988, Liberals have their lowest popular vote since Confederation, and the NDP caucus is 60 MPs larger than the previous high.

If these circumstances can't lead to something better, what should people wait for – Quebeckers to again vote federalist, only to see their MPs on opposition benches à la the Bloc Québécois? For more years of transition? Or perhaps for one party to be reduced to a rump, making the point moot?

After four elections in which Conservative votes and seats went up, the focus should be on what unites progressive voters, not excuses to keep them apart. Because labels – social democrat, liberal, left, centre-left – count for less than the unifying progressive belief that government matters.

So let's take some conventional wisdom and ask how wise it really is, starting with objections raised last week by Liberal John Duffy, whose first dalliance was with the NDP, and New Democrat Robin Sears, Bob Rae's right-hand man during the quasi-coalition with David Peterson in Ontario.

John Manley, say, probably wouldn't enjoy joint caucus meetings. But Sheila Copps probably would. And the more that progressive Liberals are given ways to work with the NDP, the less the NDP will look like the one Mr. Rae left and the more it will resemble the one that's run Manitoba or Saskatchewan well.

Should Mr. Manley or other rightward Liberals find co-operation unpalatable, they should do us all a favour and join the Tories to rebuild their left flank.

For his part, Mr. Sears says now is not the time for such talks, and that merger will happen "later rather than sooner." Maybe. But there's no reason the first talks need be about merger. Instead, they could be about picking the seats in which one party could win if the other stepped aside.

Abolishing public financing of political parties – which gave incentives to run in every seat – makes this feasible. It would also help the decades of enmity erode gradually but in a practical way that defeats Conservative MPs. Perhaps a by-election might be a good place to start. But let's begin somewhere.

Indeed, there are many such arrangements that worked in parliamentary systems such as ours. The Australian right has done it for years; in Britain, the precursor parties to the Liberal Democrats did it through the 1980s.

These may prove more useful than how Stephen Harper united conservatives, an analogy that doesn't quite hold up. Unlike the divided right, the NDP and Liberals have already co-operated – think four minority Parliaments in Ottawa, plus two more in Ontario and Saskatchewan.

These don't have to be one-offs if we find ways to let the three camps in which progressives have been divided build something together. Because whether in an NDP too small to govern, a progressive Liberal wing too small to win much, or stuck voting for the Bloc, progressives' ability to have a federal government that works for them has been constrained.

That can change – and should. So Canada can enjoy dominant parties of the centre-left and centre-right like most democracies have, and that we can, too, with a little imagination.

Jamey Heath, a former NDP research and communications director, is the author of Dead Centre: Hope, Possibility and Unity for Canadian Progressives. 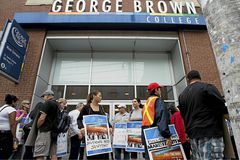 Opinion
Ontario Liberal immigrant hiring proposal is discriminating politics
September 6, 2011
Opinion
The Liberals do not need the NDP
August 31, 2011
Follow us on Twitter @globedebate Opens in a new window
Report an error
Due to technical reasons, we have temporarily removed commenting from our articles. We hope to have this fixed soon. Thank you for your patience. If you are looking to give feedback on our new site, please send it along to feedback@globeandmail.com. If you want to write a letter to the editor, please forward to letters@globeandmail.com.
Comments