Facts actually matter. Maybe that's because I focused on theories of evidence in my master's thesis or taught evidence for years at law school. Not alternative ones. Objective facts.

In the justice system, where I work, evidence grounds the adjudication of each and every dispute. You may argue about what inferences should be drawn, but objective facts are indisputable. Likewise, science requires testing and analysis of data before conclusions are drawn. Acting on facts serves us well.

Except, it appears, in the current political climate. George Orwell warned about the perversion of political thinking in 1945, when he wrote "… the most grossly obvious facts can be ignored when they are unwelcome … The most intelligent people seem capable of holding schizophrenic beliefs, or disregarding plain facts, of evading serious questions with debating-society repartees, or swallowing baseless rumours and of looking on indifferently while history is falsified."

Related: George Orwell's Nineteen Eighty-Four in the age of Trump

Forgive me for invoking Orwell – all too common, I concede, in the current environment. But the Orwellian analogies seem to write themselves these days.

Last week, U.S. President Donald Trump imposed a 90-day ban on nationals from seven countries. With a simple stroke of a pen and no apparent meaningful analysis, consultation or direction to those asked to enforce the ban, people have been excluded from the United States. The rationalization for this extraordinary act is that it is necessary to protect Americans against the terrorist threat. No one would dispute this goal. But let's put outrage aside for a moment – it rarely gets you to the right answer. It's the diagnosis here that is wholly missing.

In Canada, copycat politicians are waiting in the wings. There are proposals to screen refugees, immigrants and visitors for "anti-Canadian values" – all utterly useless. How do you assess whether someone is "anti-Canadian"? If someone is coming into this country to commit an act of terror, surely they will be devious enough to lie about their "values." There is no evidence to support the efficacy of extreme vetting much less its need. We Canadians will not be one iota safer a result of hysterical vetting or ill-advised bans.

Facts actually matter. In Quebec City, we know the targets of a mosque shooting were Muslim. The person in custody is a Canadian. Anti-Canadian values vetting would not have stopped this. We know that none of the 9/11 hijackers were from the seven countries on the ban list. Neither were the San Bernardino, Calif., shooters or the Garland, Tex., shooters or the Fort Hood shooter or the Orlando nightclub shooter. Many of the recent terror attacks inspired by the Islamic State were carried out by homegrown Americans, not refugees fleeing war-torn countries.

Here are some other basic facts. While terrorist attacks are surely frightening and shake our belief in our own safety, they are, in fact, responsible for very few deaths. That is how terrorism works – it terrorizes through its randomness. In the past few years, common household items, such as ATVs, have killed more Americans annually than terrorists. Perhaps most shocking is that thousands of Americans are shot to death every year by another American. A gun ban doesn't seem to be on anyone's political agenda. That would most assuredly save lives. I understand statistics can be manipulated, but the incontrovertible fact is there are very few terrorist attacks in Canada and the United States. That is the baseline diagnosis. A restriction or ban on small household appliances would make us safer.

These executive orders are nothing more than cheap political theatre. They are certainly not based on evidence. What they do is successfully divide the public through fear and incitement. Crisis politics and populist policies inflame rather than inform. Banning people doesn't create jobs and doesn't make us safer. We deserve more than a politically expedient anti-immigrant tweet. Or bans. Or silly slogans. Or vetting.

It used to be that, in the good old days, experience and qualifications mattered – for good reason. But now, an absence of experience, a refusal to provide meaningful solutions, a willingness to act on populist anecdotes rather than evidence are viewed as the winds of change. The "drain the swamp" mentality is change for change's sake. But you wouldn't hire a chief executive to run a corporation if they had no experience or willingness to inform themselves. Running a country is a bigger job. Since when did a lack of qualifications or work ethic become a selling point in a world leader? Acting on facts and proposing real solutions rather than silly slogans may be more work intensive, and slower to reap political rewards, but it is the right answer.

Here is another fact. My passport exposes my personal interest in all of this. I was born in Cairo. Fortunately for us, we came before there was any thought of "values vetting." I doubt my Arabic-speaking grandmother would have passed: Her Grade 4 education and lack of English would not have allowed her to understand which "values" were the right answer.

But she was a good Canadian. And her values were just fine. Fortunately, Egypt is not yet on Mr. Trump's banned list. And so today, when my son asked me whether I would be able to go on a planned trip to the United States, I had to say I think so … for now. 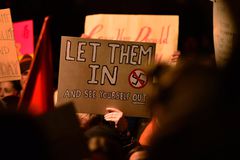 Opinion
Trudeau will pay the price if he wavers on Trump
February 1, 2017
Opinion
Anti-Muslim hate has been in Canada - and our politics - long before the violence
January 31, 2017
Follow us on Twitter @globedebate Opens in a new window
Report an error
Due to technical reasons, we have temporarily removed commenting from our articles. We hope to have this fixed soon. Thank you for your patience. If you are looking to give feedback on our new site, please send it along to feedback@globeandmail.com. If you want to write a letter to the editor, please forward to letters@globeandmail.com.
Comments