This piece is the continuation of a series in which Rudyard Griffiths, chair of the Munk Debates, Canada's leading forum for public debate, examines issues and trends on the horizon with top international thinkers and policy-makers.

How is your defence of a liberal-arts education more than nostalgia for a bygone era of higher learning, now out of sync with today's hyper-competitive, skills-based economies?

It's important to realize what's happening in advanced manufacturing. In almost every industry, basic production is getting commoditized. It's becoming routine and simple, and most everything we consume, to put it bluntly, can be made by a machine or a factory worker. You can manufacture a $30 sneaker anywhere in the world but, to sell it for $300, there has to be a story around it, there has to be beautiful design, there has to be interesting marketing; you have to understand social media. This is true whether you're a sneaker company or whether you are a cutting-edge computer-applications company, because the product is going to stand out only if you understand how human beings use technology. That's why Mark Zuckerberg says that Facebook is more about psychology and sociology, two liberal arts, than technology. His key insight was that human beings wanted to be known on the Internet. A psychology major created the global platform on which we reveal our true identity, our social selves, online.

Yet, the West still faces fierce competition from the hundreds of millions of people in China, India, and around the world pouring on to global markets with skills and knowledge in science and technology.

Well, if you look at the test scores, this is really what gets people very anxious: The United States does badly in these international tests, particularly in science and math. And it's been middle of the pack, pretty much, for the last 45 years. Yet during that period the U.S. has dominated the world of research, innovation, creativity, new industries and new technologies. It's not that it's good to be performing poorly on these tests but what fuels economic success and innovation may be other things. There may be other broader factors, like having an education system where you are able to disagree with authority, challenge authority, and think outside of the box; where you can fail and then pick yourself up and try again. To this extent, a liberal education provides you with a rounded education in every sense of the word. It teaches you how to write, which I think is the most important aspect, because you learn how to think. It teaches you how to learn. These are soft skills but they're not lesser skills. I think we all know a smart guy we went to college with who hasn't ended up being the most successful person in life. What's interesting to me is there are many of these other qualities that, if people have in large quantities, it compensates or even overtakes something as basic as raw intelligence or test-taking ability.

Is the specialization within liberal arts to blame for the perception that it is irrelevant in a fast-changing economy?

The liberal arts, particularly the humanities, have brought this crisis on themselves. Focusing on ever-more esoteric subjects is fine in itself but it's not what liberal arts undergraduates should be studying. Students who major in English, for example, should be required to have some exposure to Shakespeare, but not to know East African poetry from 1971 to 1972. There should be some sense of making sure that the student is engaging with a broad set of materials and they have learned how to understand a text or write a paper. These are absolute basic skills.

What does Western society turn into if we're not able to resuscitate the liberal arts?

I think it could be a great tragedy. The liberal arts are an incredibly crucial part of being a democracy. About 2,500 years ago, the ancient Greeks began experimenting with democracy. And they felt they needed a new system of education because of that – once the people were in charge of their own affairs politically, the Greeks felt they needed a more general education, and this is where the idea of a liberal education comes from. The Romans coined the term "a liberal education" because it was liberal, not in the left-right sense but in the sense of pertaining to liberty, pertaining to the ability to live as free men and women.

Without being grandiloquent, we are citizens and we are meant to be engaged with the big questions of how we govern ourselves. If we don't have this kind of broad education, if we all become narrowly, technically focused, it will have an impact on our ability to function as healthy democracies. So for me, the stakes are very high.

To hear the entire conversation, subscribe to The Next Debate podcast on iTunes or visit www.munkdebates.com

Fareed Zakaria: ‘There is a market for intelligent discussion on television’
May 16, 2014 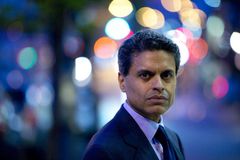