The scandal didn't appear to hurt the Tories in public opinion. They didn't move down, the Grits didn't move up. You might even argue, peculiarly enough, that the Justin Trudeau honeymoon has been coming to a close during this scandal. Some polls, such as one by Ipsos-Reid last week, showed his party losing support.

With summer here, with Parliament out of session, with a big cabinet shuffle to change the dial, relief appeared in sight for the Stephen Harper government. The scandal was on the verge of becoming old news.

But one of the oldest lessons of politics is that it's not so much the deed that brings you to grief as an effort to conceal it. That's the danger that confronts the Harper government now.

An RCMP affidavit, based on its investigation into the Senate scandal, has reignited the Senate controversy. It casts doubts on the Prime Minister's version of events. It has the NDP crying coverup and accusing him of having "intentionally misled the Canadian public."

Mr. Harper stated that his chief of staff, Nigel Wright, acted on his own in giving Senator Mike Duffy $90,000 to reimburse the Senate for invalid expense claims. "Those were his decisions," the PM said. "They were not communicated to me or to members of my office." But the Mounties' court document says Mr. Wright's lawyers told its investigators that some PMO officials were told of the decision to give Mr. Duffy the money.

That's one contradiction. The affidavit reveals another. When the news of the Wright payout emerged, Mr. Harper explained that the money was offered so that taxpayers wouldn't have to foot the bill for the Duffy expenses. But we learn from the affidavit that the party, while balking at the $90,000 figure, was prepared to pay a smaller amount of $32,000. Since party funds include per-vote subsidies and donations subsidized by tax credits, it's hard to make the case that taxpayers were foremost in mind.

Mr. Harper, a hands-on operator, is the head of the Conservative Party. On a high-profile controversy such as the Senate one, would it not seem likely that he would have been informed of the initial $32,000 payout plan? When that solution didn't go forward, would he not have inquired as to what was done in its place to resolve the matter?

RCMP statements in an affidavit are not necessarily accurate. But in dealing with Mr. Wright's lawyers, Mountie investigators were hardly dealing with a source hostile to the PMO.

Doubts on the government's word on the case go back to House Leader Peter Van Loan's statement that Mr. Duffy was showing "leadership" on the file by paying back the money. There was the matter also of a Conservative-dominated committee removing damning references to Mr. Duffy in a report.

Among the reactions to Mr. Harper's handling of this controversy, one is particularly noteworthy. It comes from Rob Walsh, the former law clerk of the House of Commons who, as top legal adviser, was front and centre on major ethical controversies and scandals in both Liberal and Tory governments. His position called for him to steer clear of political debate and he did so, gaining a reputation for being scrupulously non-partisan.

But Mr. Walsh, who is very disturbed by what is happening to parliamentary democracy in this country, was motivated to speak out last week. Calling into question the word of the Prime Minister, he told the media that Mr. Harper owes it to Canadians "to accept responsibility for what his office is doing and to not protest he knew nothing when it frankly seems implausible or irresponsible for him to have not known this was going on."

Harper speaks up on Duffy affair 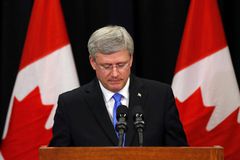