Scott Hennig is the vice-president, communications for the Canadian Taxpayers Federation

Currently, more than 50 Canadian cities have a public-art program. Many of them either shake down developers to fund public art, or set aside a percentage of a government infrastructure budget for public art. Not surprisingly, the results have often been embarrassing.

Montreal has its fake granite tree stumps. Vancouver has the Main Street Poodle – a seven-foot-tall dog on a pole. Edmonton has its Talus Dome – a giant pile of shiny silver balls blinding nearby drivers on sunny days. Ottawa has the faux badminton-racquet light poles in the Jack Purcell Park, honouring the wrong guy with the same name.

But Calgary is the poster child of failed, embarrassing public-art projects. Calgary's policy of setting aside 1 per cent of each infrastructure project budget to add public art into that project has resulted in unpopular, uninspired, expensive public-art projects being erected in often obscure locations. There's the giant blue ring called Travelling Light, a LED light display on the side of a waste-water lift station, and Bearing, a large, round metal ball that can only be viewed from inside a fenced-off fire-department maintenance yard. We can't forget Wishing Well, a shiny interactive metal statue that is now in storage because it burned a hole in a visitor's jacket. And now the city has Bowfort Towers, which is so controversial that the area's city councillor wants it torn down.

Some critics have suggested tweaking the selection process for public art to ensure better outcomes, but perhaps we should look to the Wynwood neighbourhood of Miami for some real direction.

Formerly the inner-city garment district in the mid-20th century, Wynwood was home to a mix of blue- and white-collar workers. But over the second half of the past century, it slowly deteriorated into a slum of worn-down homes and impoverished citizens with few job prospects. Race riots and drug busts were not uncommon in the 1990s and businesses fled the area.

However, in the mid-2000s, land developer Tony Goldman saw a real opportunity. Known for his contribution to the redevelopment of New York's SoHo neighbourhood and Miami Beach, Mr. Goldman bought cheap property in Wynwood – both retail and large warehouses. Between 2004 and 2005, Goldman purchased more than 25 Wynwood properties.

In 2008, Mr. Goldman realized that his large, windowless warehouse walls were the perfect canvas for street art – graffiti. He offered free airfare, accommodations, supplies and a giant canvas to some of the world's most famous graffiti artists to showcase their work. Dozens took him up on his offer and turned his drab buildings into beautiful works of art. And thus, Wynwood Walls was born.

Now the centrepiece of the neighbourhood, Wynwood Walls is an outdoor, public museum of street art. Artists from around the world now compete to install their work on the walls. Its popularity with tourists has forced Goldman Properties (run by his daughter Jessica after Tony died in 2012) to expand, using shipping containers as canvases where warehouse walls don't exist.

More impressive than the art itself is what happened in the surrounding area. Neighbouring businesses followed suit, commissioning artwork on their building walls. Today, nearly every building in the neighbourhood has a wall or two adorned with street art.

All of this occurred because private business owners invested in public art.

Similarly, the most photographed piece of public art in Calgary – the Wonderland sculpture (the 12-metre-high grid-like head) at the Bow Building – was entirely funded by Encana Corporation and Cenovus Energy, not taxpayers.

Miami's Wynwood Walls cannot be replicated by governments using tax dollars. It can only be replicated by those with skin in the game. Public art has the ability to create tremendous benefit.

The Walls have shown that tourists, citizens, land developers and the city all benefit when the private sector takes the lead on public art. 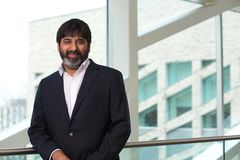 Why 'Pipe Man,' a Tom Thomson tribute, has small-town Ontario up in arms
July 15, 2017
OPINION
Art, laughter and important civic issues in Vancouver
July 14, 2017
Follow us on Twitter @globedebate Opens in a new window
Report an error
Due to technical reasons, we have temporarily removed commenting from our articles. We hope to have this fixed soon. Thank you for your patience. If you are looking to give feedback on our new site, please send it along to feedback@globeandmail.com. If you want to write a letter to the editor, please forward to letters@globeandmail.com.
Comments