The review has become a staple of life online. On the Web, we are beckoned to offer our opinions on restaurants, TV shows, or smartphones. And if some had their way, we may soon be reviewing people in a similar fashion.

If that last one sounds like a terrible idea, it's because it is. Yet, that didn't stop two entrepreneurs, Julia Cordray and Michelle McCullough, from starting work on an app called Peeple that purported to do just that. Widely billed as a "Yelp for people" (after the popular site which lets people review everything from barbers to bars) Peeple meant to allow people to rank others on a five star scale – whether or not those people wanted to be reviewed.

The app drew a torrent of criticism, not just because of the general principle, but because how easily such a tool could enable and foster abuse. So severe was the reaction, the app's creators not only pulled their social media accounts, but removed the features that were causing so much controversy. Now, Peeple will offer users full control over their own profile, and only allow positive comments – essentially rendering this new version of the app as useless as the old one was pernicious.

With the storm now likely passed, however, the issues raised by Peeple still remain. If the era of the Web has proven anything, it's that no matter how abhorrent an idea – from sharing pictures of sexual abuse on social media to inciting harassment campaigns – someone will do it. And Peeple, after all, was based on the inherent capacity of digital technology to do two things: collect information, and then publish it. If Peeple won't produce a database that reviews people or lists their sins, someone likely will – and it suggests that going forward, privacy online will depend on to what extent you can wrest control of your identity online.

In the decade or so since social media's rise, we have already become accustomed to the idea that you should be careful with what you post. More than a few people have lost work or opportunity based on a photo or comment they posted on Facebook. But the flip side of the social media revolution was that it made publishing easy for everyone, regardless of the topic – even if, for example, the subject is you.

Certainly, libel laws clearly apply to the Web; someone cannot spread lies about a person without consequence. Yet if we could once rely on time or distance to obscure our pasts, that safety could now be quickly undone with a Google search. What the mere existence of Peeple suggests is that the archives of our identities are not entirely under our control – that other people's opinions of who we are may spill out across the Web whether we want them to or not.

What it means is that to be careful about what you post isn't enough. Privacy was once a question of what we let others know. But as the Web is increasingly a place that operates beyond our control, privacy becomes more a question of what can be erased – of how one can take back control.

Since 2010, the EU has had "right to be forgotten" legislation – that is, individuals can ask to have information about them removed from search results after a period of time has passed.

At the time of its inception, the arguments made against it were rooted in both free speech and neutrality: that the law contravened the then-new ideal of a transparent Web as a record of everything. Yet even in a short time, it has since become clear that such ideals were naive: that instead, what we need for privacy are not notions of radical transparency, but rather empowerment – that in a world in which others feel compelled to review us like restaurants, safety lies in being able to choose what and from whom we can hide. 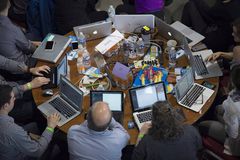 California law boosts data protections, but activists say action still needed at federal level
October 9, 2015
Follow us on Twitter @globedebate Opens in a new window
Report an error
Due to technical reasons, we have temporarily removed commenting from our articles. We hope to have this fixed soon. Thank you for your patience. If you are looking to give feedback on our new site, please send it along to feedback@globeandmail.com. If you want to write a letter to the editor, please forward to letters@globeandmail.com.
Comments