Queen Elizabeth drinks her milk raw. She reportedly thinks so highly of unpasteurized milk that, when her grandsons Princes William and Harry were students at Eton, she instructed herdsman Adrian Tomlinson to bottle up raw milk from her Windsor herd and deliver it to them at school.

Canadians, however, are not permitted to emulate their head of state. Raw milk cannot legally be sold in Canada, except into government-authorized "supply management" cartels, where it goes to be pasteurized. Only those who happen to own their own cow can legally consume raw milk.

A group of some 450 B.C. city-dwellers thought they had a solution. They organized Home on the Range Dairy, and jointly acquired a herd of 25 cows. They hired farmer Alice Jongerden to look after their cows - feed them, milk them, bottle the milk and make it available to its owners.

This type of livestock boarding contract has long been known to English law. In fact, there's even a special name for it: agistment, the taking in of livestock to graze on your land in exchange for payment. Ms. Jongerden is called an agister.

But the Fraser Health Authority disapproved of the arrangement and took Ms. Jongerden to court. The real question, which no B.C. court has yet tackled, is whether she can be considered to be "selling" or "supplying" raw milk in contravention of the Milk Industry Act, when the individuals who receive it are already its owners.

Nevertheless, the B.C. Supreme Court issued an injunction this past March prohibiting Ms. Jongerden and others from "packaging and/or distributing raw milk and/or raw milk products for human consumption." But the cows took no notice of the Supreme Court and continued to fill their udders twice a day. They had to be milked or they would soon be bellowing in pain, risking udder infections and possibly dying.

Ms. Jongerden continued milking, placing the milk in bottles clearly marked "Not for Human Consumption" and "Not for Sale." The owners could have pasteurized it themselves if they had considered it hazardous. They could have bathed in it, used it as plant fertilizer, or fed it to their pets. Only they know what they actually did with it. Ms. Jongerden, however, was charged with contempt of court. On Sept. 14, a temporary order was made, prohibiting her from engaging in the "further production or distribution of raw milk." She goes back to court in mid-October.

This leaves the herd owners with three unsatisfactory alternatives:

· Don't have the cows milked at all, in which case they will suffer cruelly;

· Find a new agister who is not subject to the temporary September order, but who is willing to face his own eventual contempt charges for violating the sweeping March injunction;

· Milk the cows and dump the milk on the ground.

The situation is ridiculous. The milk is there. People have bent over backward to get it. They're all aware the health authority thinks it's dangerous. They still want it. But instead, it will probably be destroyed - wasted - purportedly to protect people from taking a risk they are willing to take.

Canada is out of step with the rest of the world. The United Kingdom, France, Germany and many U.S. states have programs that allow public-health authorities to certify a dairy's output as safe for raw consumption. In France and Italy, there are vending machines dispensing raw milk to eager consumers. B.C. residents can cross the border to Washington State and buy it legally.

Moreover, an overwhelming percentage of conventional Canadian dairy farmers - quota owners who sell milk into the provincial cartels for pasteurization - drink milk raw themselves. In a recent survey of 2,185 milk producers published in Preventive Veterinary Medicine, 88.7 per cent "reported that they or their families consume unpasteurized milk from their bulk milk tanks."

We don't ban balloons even though some eight or nine children die annually in North America from choking on them. We don't prohibit skiing, hockey or even parachute jumping, despite the risks of injury or death. We don't ban seafood, ground beef, poultry or cold cuts, even though they are far more common sources of food poisoning than raw milk.

One can't help suspecting that the fanaticism of Canadian authorities toward raw milk has more to do with protecting the supply management cartels than protecting public health.

Karen Selick is the litigation director for the Canadian Constitution Foundation, which is defending Ontario raw milk farmer Michael Schmidt on similar charges.

The battle over raw milk will spill into the future
April 2, 2010 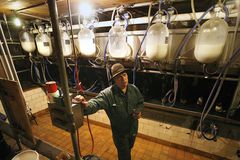 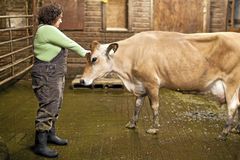