In honour of National Procrastination Week, let's take a moment to feature the greatest procrastinator in history (besides you). The runner-up is playwright Richard Sheridan, who finished the final act for The School for Scandal while it was being performed on opening night.

It all started in 1956 when Mr. Waas persuaded the manager of one of Philadelphia's largest hotels to put up a sign in front of the ballroom that read: "The procrastination club's meeting has been postponed." On the way to other events, the press passed the sign and bombarded Mr. Waas for details, eventually forcing him to actually have a procrastination meeting. It was the beginning of the longest run of procrastination pranks ever perpetrated.

In 1966, a large group of PCA members boarded a bus emblazoned with the banner, "Excursion to New York's World Fair." That fair had actually closed a year and a half earlier. Unless it was for the 1939 fair - no one was entirely sure. On arrival in New York, the club members took snapshots of the now defunct exhibits and empty venues.

In 1976, a PCA delegation flew to England to visit the Whitechapel Bell Foundry. "It wasn't one of those fly-by-night bell foundries," Mr. Waas assures me. "It's been around for 500 years."

Not only did Whitechapel forge London's Big Ben but also the U.S. Liberty Bell, the one with the crack. Upset over that flaw, the PCA members demanded that Whitechapel provide a replacement. After parading signs such as "We got a lemon!" Whitechapel relented "as long as it was returned in the original packaging." While waiting for the rewrapping, Mr. Waas recommended turning around the Liberty Bell so the crack would be on the other side.

The PCA, when it gets around to it, also provides annual prognostications. "We have a 100-per-cent perfect record," Mr. Waas brags. "We take a whole year to come up with the things." For example, the 1991 prediction that "in a stunning display of magic, the Soviet people will make their country disappear" was issued in 1992, a year after the Soviet Union collapsed.

The PCA has at least 12,000 members, with 100 million more ready to sign up any day now. The club also has a serious message. (No, it's not "It's never too late to look backward.") As Mr. Waas puts it, "The art of procrastination is such that, if you take a step back and look at the things to do, you see there are priorities." There are plenty of things we could do later. Sometimes, this includes work itself. Taking time just to relax, to do nothing, is a priority, too.

The PCA sporadically doles out a Procrastinator of the Year award, but "it seems like we're having a lot of trouble getting nominations from the nominating committee," Mr. Waas says. And during periodic banquets, it's not uncommon to open the sealed envelope only to find a blank sheet of paper. This year, I'd like to nominate Les Waas. First prize is tickets to the 2010 Vancouver Olympics.

One more thing: We may be able to cut back on procrastination, to make it a manageable flaw. But it will never stop being part of our humanity. In short, procrastination is who we are.

Piers Steel is a professor of human resources and organizational dynamics at the University of Calgary's Haskayne School of Business. 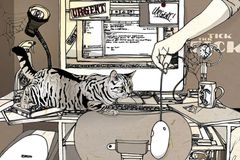