Amy Knight is the author of Orders To Kill: The Putin Regime and Political Murder.

Monday's shocking stabbing of Tatyana Felgenhauer, the young deputy editor-in-chief of Russia's independent radio station Ekho Moskvy, is yet another reminder of the dangers faced by Russian journalists and politicians who criticize the Kremlin.

The attack on Ms. Felgenhauer, who remains in serious condition, comes just five months after another prominent Ekho Moskvy journalist, Yulia Latynina, was forced to flee Russia in fear of her life when her home was gassed and her car set on fire. This past spring, anti-corruption crusader and would-be presidential candidate Alexei Navalny was dosed with a poisonous dye that left him nearly blind in one eye, and just a few weeks ago the head of Mr. Navalny's Moscow campaign staff, Nikolai Lyaskin, suffered a concussion after being hit with a steel bar.

Russia's Investigative Committee has started a criminal investigation into the attack on Ms. Felgenhauer, but it is unlikely to go beyond the alleged perpetrator, an Israeli-Russian citizen named Boris Grits, who was arrested immediately after the crime. As Mr. Navalny observed on Twitter, "It is interesting that Interfax and RIA [two state-sponsored news outlets] hurried to inform us that [the attack] was hooliganism and had nothing to do with the journalist's activity."

Mr. Grits had written blog posts recently in which he talked about being obsessed with Ms. Felgenhauer, and he was clearly mentally imbalanced. But this does not rule out the possibility that someone from Kremlin circles encouraged the alleged perpetrator Grits to commit this crime, with promises that he would be treated leniently. Writing from exile, Ms. Latynina noted: "Using psychotics is a classic technique from the textbook of special services."

If this was the case with Ms. Felgenhauer, then the Kremlin made no secret of laying the groundwork for the attack. On Oct. 11 and 12, the government-controlled television channel Rossiia-24 produced a two-part program discussing how Western NGOs and the U.S. State Department have funded opposition parties and journalists in Russia. Ekho Moskvy and Ms. Felgenhauer were mentioned specifically as recipients.

Significantly, both Ms. Felgenhauer and Mr. Navalny have made themselves enemies of the Kremlin's most favoured television journalist, Vladimir Solovyov. In a scathing documentary film produced late last month and shown on YouTube to thousands of viewers, Mr. Navalny portrayed Mr. Solovyov as one of the "lackeys of the regime, whose lies hold the regime together more than the police or the national guard."

On Sept. 29, the day after the video appeared, Ms. Felgenhauer discussed it on her morning show and she and her co-host invited viewers, not without sarcasm, to assess Mr. Solovyov's journalistic skills by calling in votes to the station. Mr. Solovyov had previously singled out Ms. Felgenhauer and Mr. Navalny for scathing criticism, but Mr. Navalny's film and Ms. Felgenhauer's endorsement of it doubtless drew even more ire towards them on the part of both Mr. Solovev and the Kremlin. Ms. Felgenhauer's colleague Ksenia Larina tweeted after Monday's attack: "Solovyov really wanted this, the beast. Who, they say, will shut their [critical journalists] filthy mouths? There were volunteers."

Is Mr. Navalny next in line as a victim of yet another act of violence? In addition to the stabbing of Ms. Felgenhauer, there have been other ominous signs for him, including a new development in a case Russian prosecutors have been pursuing against William Browder, who initiated the 2012 U.S. Magnitsky Act, a version of which was passed last week in Canada. The law sanctions Russians responsible for the death of Sergei Magnitsky, a lawyer who uncovered a tax fraud perpetrated by Russian officials. Russian prosecutors are now probing allegations that Mr. Browder actually colluded with Western intelligence agencies to have Magnitsky murdered. And, far-fetched as it may seem, Mr. Navalny has been mentioned as a participant in the plot.

Prosecutor-General Yury Chaika had accused Mr. Navalny of being funded by Mr. Browder almost two years ago after Mr. Navalny released a film on YouTube exposing the vast corruption of Mr. Chaika's family. But the alleged Magnitsky murder plot has raised the Kremlin's vendetta against Mr. Navalny to a new, very perilous level.

Despite the dangers he faces, the indomitable Mr. Navalny is running a vigorous campaign for the Russian presidency in next March's elections, although he is still barred from the ballot because of two clearly bogus felony charges. After being released Sunday from prison, where he served 20 days for violating the procedures of organizing street demonstrations, Mr. Navalny flew immediately to the city of Arkhangelsk and gave a rousing campaign speech before a huge crowd, reminding his audience that their main problem is President Vladimir Putin.

Meanwhile, it was revealed on Tuesday that Ms. Felgenhauer's attacker had a written plan of the layout of Ekho Moskvy's building. The station's editor-in-chief, Alexei Venediktov, observed: "He knew things he shouldn't have known. How did he know Tanya would still be here? By the time of the attack, she would normally have left. There are many questions." Judging from what has happened with previous acts of violence against Kremlin critics, answers are unlikely to emerge.

Opinion
How the Kremlin will exploit the St. Petersburg attack
April 5, 2017
In Ukraine, people power rattles another government
October 20, 2017 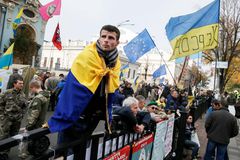 Russian journalist put in coma after being stabbed in throat in Moscow
October 23, 2017 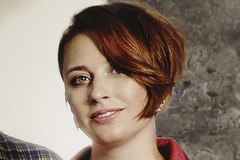