On this date 40 years ago, British trade commissioner James Cross was kidnapped by a cell of the Front de libération du Québec. A few days later, on Thanksgiving weekend 1970, Quebec's labour minister, Pierre Laporte, was kidnapped by a different FLQ cell, grabbed as he played football on the lawn of his suburban Montreal home. While Mr. Cross's kidnapping was alarming, Mr. Laporte's abduction was a steep escalation of what we've come to call the October Crisis.

I was growing up in Quebec at the time, and my family, like many others, was just about to sit down to Thanksgiving dinner when we heard the news about Mr. Laporte. This didn't feel like a new ultimatum in the week's parley - it felt darker and more ominous, even if you'd been deafened by the discrete noise of the Quiet Revolution: the exploding mailbox. (It was years later, living in another city, that my American boyfriend-now-husband asked me why I crossed the street when I approached a mailbox. I still do it sometimes, unconsciously.)

The escalation that clicked up a notch right after Mr. Cross's abduction - communiqués delivered to radio stations, the broadcasting of the FLQ manifesto on Radio-Canada (a condition for Mr. Cross's release) - was now taking the steps two at a time: a crisis creating some of its own momentum.

There was a heart-freezing letter from a captive Mr. Laporte to his friend, premier Robert Bourassa ("You have, in short, the power over my life"), the army in the streets of Montreal, prime minister Pierre Trudeau presaging his next move with his "Just watch me" response to a reporter, a pro-FLQ rally, the declaration of the War Measures Act - and then the death of Mr. Laporte.

I was at Place des Arts watching Les Grand Ballets Canadiens perform The Who's Tommy the night Mr. Laporte's body was found in the trunk of a car at Saint-Hubert airport; the lyrics to Pinball Wizard were lingering in my ears when I got my first taste of martial law and crowd control, army-style, as I was among those lined up against the walls of the metro. The following days were ones of grief, disbelief and anger.

In early December, Mr. Cross was released and his kidnappers exiled to Cuba. By year's end, the killers of Mr. Laporte had been arrested. The War Measures Act remained in effect into 1971.

Some will say that 1970s-era Canadian terrorism wasn't on the same page as modern-day terrorism. While it's true that exploding mailboxes aren't suicide bombs, the attacks by those early home-grown terrorists in Quebec were just as effective as those of today's terrorists: Both mean to control people using fear.

This week's warnings from both the U.S. State Department and Canada's Department of Foreign Affairs about the potential for terror attacks in Europe made me shudder - a more distant, diluted version of the fear I used to feel as a kid when our school was evacuated because of bomb threats. We did more than get used to the fear; we became blasé and joked (blackly) about it. My high school's yearbook cover for 1970-71 was a composite photo of students and teachers gathered at the farthest edge of the school's athletic field; a young artist added a fuse coming from the school building and a disembodied hand with a lit match.

Beyond using humour to cope with fright, beyond terrorism inciting fear and political paralysis, terrorist acts give violence a life of its own, as the urge toward vengeance stretches across generations. I dated the son of military explosives expert Walter Leja, forever maimed in a mailbox explosion in 1963; I don't have much compassion for the bomber.

Canadians are quick to point fingers at terrorism elsewhere, or to believe that terrorism in Canada must be influenced or directed from outside the country. Yet, we seem loath to examine closely what happened in 1970, to see how fragile Canada's democracy was in the face of homegrown terrorism directed at our beliefs about ourselves and our defining institutions.

This Thanksgiving, 40 years after an "apprehended insurrection" and our government's reaction to it, would be a good time to think about these things. It would also be a good time to be grateful for all we have that others desire - and to consider what we're willing to give up to protect what we have.

A selection of front pages from the October Crisis Gallery
April 28, 2018 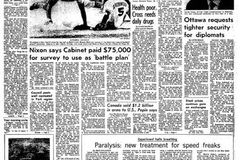 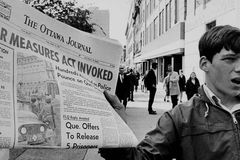