Steve Bannon's White House days may or may not be coming to an end, but the end-of-days agitator can only look back on his first (or last) seven months in the West Wing with deep-state satisfaction. The country is descending into violent civil conflict, the white nationalist forces are in the ascendant and the President of the so-called United States seems to revel in dividing them.

Does it get any better than this for Mr. Bannon, Mr. Trump's chief political adviser? "Honey Badger" has, in the manner of the tenacious weasel-like animal he compares himself to, kept his head down in recent months while continuing to gnaw on the collective ties that bind – such as by rolling out immigration bans, etc. – impervious to the hysterical attacks of the progressive left and its apologists in the mainstream media. The latter's moral outrage at Donald Trump's now repeated declaration of "blame on both sides" for the carnage in Charlottesville, Va., only provides Mr. Bannon's soldiers of the alt-right with the ammunition they seek.

For nothing excites the neo-Nazis and, according to the President, "fine people" who joined them to carry torches and chant "blood and soil" in a Virginia college town last Friday than the prospect of a violent reaction on the left. Twice now, Mr. Trump has chosen to absolve the hatemongers of their hate by suggesting those uppity equality marchers who confronted them had it coming.

For subscribers: Renzetti: Is Donald Trump winning his war on reality?

After all, who are they to suggest there is no place in 2017 for a statue honouring Confederate generals Robert E. Lee or Stonewall Jackson, men who fought for the right of some human beings to literally own others? What's next? "George Washington was a slave owner," Mr. Trump pointed out. "Are we going to take down statues to George Washington?"

Whether or not he realizes it, the saddest and least self-aware of U.S. presidents is channelling Mr. Bannon in uttering sophistries such as this. That tactic of legitimizing the grievances of the hatemongers – for instance, by saying "you had many people in that group other than white nationalists and neo-Nazis … and the press has treated them absolutely unfairly" – follows the template Mr. Bannon successfully deployed to put Mr. Trump in the White House in the first place.

Mr. Bannon neither sought nor would have wanted a victory that involved uniting Americans. What he sought and won was revenge against the liberal "elites" of Washington and the coasts and the extreme political correctness that glorified campus "safe spaces," affirmative action and minority rights. The "forgotten people" had been condescended to long enough. And there was no way to contain their anger. War, in Mr. Bannon's view, was inevitable. The sooner, the better.

It' s all unfolding as Honey Badger envisioned.

There are still those, God bless their souls, who think the Trump presidency is salvageable. That with adult supervision in the West Wing, and Mr. Bannon's expulsion from it, order can be restored to a dysfunctional administration and a few legislative victories achieved. After all, the job and stock markets are booming, and nothing gets voters to forgive a president's flaws like a strong economy. Ask Bill Clinton.

But the Trump presidency is not salvageable. At best, all the few good men and women in his administration can do is seek to limit the damage Mr. Trump inflicts on the country and planet and clean up the domestic policy and diplomatic messes he makes. Frankly, they might be doing civilization more of a favour by denouncing their boss publicly rather than standing placidly by while he blows dog whistles to the Klansmen, as Treasury Secretary Steve Mnuchin, Office of Management and Budget Director Mick Mulvaney, and Transportation Secretary Elaine Chao did on Tuesday.

Mr. Bannon's purported firing offence is not the race-based war he has fomented but his alleged leaking of stories to his alma mater, Breitbart News, seeking to undermine National Security Chief H.R. McMaster, a proponent of a continued U.S. military intervention in Afghanistan. But without Mr. Bannon, Trumpism has no umph and the President knows it. That's why this dark knight has survived every previous attempt by Mr. Trump's son-in-law Jared Kushner to get rid of him.

Mr. Bannon's supporters are already accusing those calling for his ouster of seeking to undermine the President himself. "They think if they can separate Bannon from the President that they'll weaken the President because that will separate him from his base," Chris Buskirk, editor and publisher of the pro-Trump website American Greatness, told U.S. National Public Radio.

In or out, Honey Badger must be loving it. 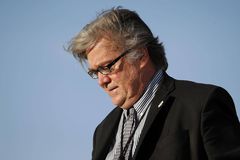 Opinion
Steve Bannon: The man behind the mayhem
April 13, 2017
Opinion
Is Donald Trump winning his war on reality? Subscriber content
August 4, 2017
Follow Konrad Yakabuski on Twitter @konradyakabuski
Report an error Editorial code of conduct
Due to technical reasons, we have temporarily removed commenting from our articles. We hope to have this fixed soon. Thank you for your patience. If you are looking to give feedback on our new site, please send it along to feedback@globeandmail.com. If you want to write a letter to the editor, please forward to letters@globeandmail.com.
Comments