China and the Philippines are currently engaged in a standoff at Scarborough Shoal in the latest round of tensions between coastal states over competing claims to valuable ocean space in the South China Sea. As the Canadian government shifts its focus toward Asia, the South China Sea dispute presents a challenge for Canada's re-engagement with the region.

Although Canada's friends in the region – Australia, Japan and the United States – do not claim any part of the South China Sea, they are becoming concerned about Chinese belligerence. In addition to confronting Vietnamese and Philippine ships, Chinese ships and aircraft have harassed U.S. vessels operating in the South China Sea. The United States, Japan and Australia are thus becoming concerned that China seeks to limit their access to its claimed waters. Problematically, these claimed waters amount to the entire littoral area from the Yellow Sea to the waters off Indonesia, bounded on the east by the islands of Japan and the Philippines.

The Harper government has made a clear decision to engage East Asian states, particularly China, as it attempts to capitalize on the second half of the "Asian Century." Ottawa has made no secret of its preference for focusing this engagement on economic issues as part of a strategy to diversify away from U.S. markets.

Regional tensions threaten Ottawa's preference. Canada's diplomatic track record in the region, such as it exists, has previously been centred on supporting maritime security initiatives in Southeast Asia. It has a history of diplomatic activism in this policy realm.

Canada has been silent, however, on the recent flare-ups in maritime East Asia. This silence was most striking at last year's ASEAN Regional Forum as maritime security issues dominated the agenda. Canada's silence is in stark contrast to its strident criticism of previous instances of deviant behaviour in East Asia: North Korea's acts of war against South Korea in 2010 and Myanmar's human-rights record. Canada's friends in the region interpret China's behaviour as an attempt to restrict the freedom of navigation in East Asian seas and undermine a key pillar of international order.

Despite recent efforts to improve relations between China and other South China Sea claimants, concern over freedom of navigation issues will not abate. Japan is seeking to build as much international support as possible for its interpretation of maritime law in an effort to change Chinese behaviour. This logic is also applied in support of U.S. ratification of the Law of the Sea. Quiet diplomatic pressure has been applied to Canada by its friends in the region to address the growing disconnect between China, its neighbours and the United States on maritime security and navigational issues in East Asia. One option is for Ottawa to issue a diplomatic statement supporting the peaceful resolution of the disputes in the South China Sea and articulating its stance on navigational freedoms through regional seas. Beyond issuing such a statement, Canada could leverage its legacy as an impartial dialogue partner, built during the 1990s, to once again facilitate dialogue between China and its neighbours.

However, Ottawa appears reluctant to weigh in on security issues to which it is not a party, particularly security questions surrounding the rise of China. Furthermore, unlike the 1990s, Southeast Asia is now home to numerous dialogues on maritime issues, under the auspices of the ASEAN Regional Forum and other institutions. Canadian participation in a regional track-two dialogue would likely be welcomed, but is not as vital as it once was.

China has become socialized into select international norms, but like all states, it will deviate when its interests are served, particularly when perceived core interests are threatened. Therefore, additional diplomatic support from Canada on South China Sea issues may in fact do little to modify Chinese behaviour. Indeed, a public Canadian statement that supports the U.S.-Japanese position on freedom of navigation in the South China Sea could further reinforce the dominant nationalist narrative within China, in which Western states seek to impose their will on China. Therefore, continued Canadian ambiguity on South China Sea issues, however challenging, may be the best way forward.

James Manicom is affiliated with the Balsillie School of International Affairs and the Asian Institute, University of Toronto. This is based on a recent Canada-Asia Agenda published by the Asia-Pacific Foundation of Canada.

In the South China Sea, two superpowers flex their muscles
May 1, 2018 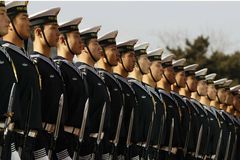