Andrew Jackson was an outsider presidential candidate who mastered the inside game in the 19th century. Dwight Eisenhower did the same more than a hundred years later. So did Ronald Reagan.

Donald Trump departs from presidential tradition in many ways, but when historians evaluate his years as chief executive they may breeze past the stylistic elements and even important cultural markers – including his role in the current contretemps over NFL players and coaches – and focus on actual achievements in governing.

Like so much of the Trump style, the President's approach toward governing is improvisational – sometimes working with Republicans, sometimes excoriating them; occasionally sidling up to Democrats, oftentimes denouncing them. His legislative achievements are meagre and in announcing his tax overhaul plan on Wednesday he acknowledged that he may need help from his Democratic rivals – which is why he invited Democratic Senator Joe Donnelly of Indiana to join him on Air Force One for his tax speech in the state, only to publicly threaten Mr. Donnelly with personally campaigning against him if he opposes the measure.

But as a result of Mr. Trump's shifting alliances and his inclination to reject the totems and taboos of the capital, the President is isolated from important Washington power centres – so much so that, in an e-mail to supporters recently, he sought to make a virtue out of that isolation.

"They say I'm isolated by lobbyists, corporations, grandstanding politicians and Hollywood," according to the e-mail. "GOOD! I don't want them." The irony: At the bottom of the e-mail, in far smaller type, is the disclosure that the message was distributed by the Republican National Committee, perhaps the most formidable permanent presence in Washington.

Presidents sometimes use the term "splendid isolation" – originally a diplomatic locution often attributed to the early 20th-century Canadian parliamentarian George Eulas Foster – to describe their White House lives. Calvin Coolidge was isolated by shyness, Richard Nixon was isolated by temperament, Woodrow Wilson by debilitating illness. None found it an asset, and historians have punished them for their remoteness and virtual confinement.

"Even successful presidents talk about their 'isolation' to characterize their natural condition," said David Greenberg, the Rutgers University political scientist and author of the 2016 Republic of Spin: An Inside History of the American Presidency. "But none until now has aspired to it." Mr. Trump, who is known to have many associates but few friends, may be more isolated than even former president Jimmy Carter, who went to Washington in 1977 only to have effort after effort to assimilate fail, largely because the denizens of the capital deemed him arrogant and because his efforts at courting congressional leaders, including those of his own party, were ham-handed.

Republican presidents almost always are congenial to the appeals of business lobbies ranging from the United States Chamber of Commerce to individual corporate interests, regularly consorting with them on legislation, especially taxes and regulation. In his declaration of isolation, Mr. Trump listed lobbyists and corporations as the first two demons.

"This is overt, despite the fact that a lot of people around him are from Washington," said David Rehr, who teaches legislative strategies at the George Mason Law School. As president of the National Beer Wholesalers Association and, later, the powerful National Association of Broadcasters, Mr. Rehr was widely regarded, especially among Republicans, as one of the premier Washington lobbyists of the past several decades.

"Trump has been phenomenally aggressive in going against the groups who put him in office." Many of those lobby groups assisted Mr. Trump as a campaigner. But with Mr. Trump as President, the ordinary expectations of the capital have been rendered moot.

Ordinarily, Democrats would find it refreshing to work with a Republican president who has declared his enmity toward business lobby groups, but the isolation Mr. Trump applies to corporate representatives extends across the Washington landscape. Even the Congressional Budget Office, which for decades was considered invulnerable to criticism, has come under attack.

And ordinarily Republican congressional leaders would be relieved to work with a GOP president. Senator Howard Baker Jr. became Senate majority leader when Mr. Reagan became president in 1981, and the relationship was cordial and warm – so much so that the 40th president eventually appointed him White House chief of staff. It is inconceivable that Mr. Trump might select Senate majority leader Mitch McConnell as his chief of staff.

Indeed, the President and the Kentucky Republican have been squabbling for months, even though Mr. McConnell's wife, Elaine Chao, sits at Mr. Trump's cabinet table as Transportation Secretary. Mr. Trump has blamed Mr. McConnell for the repeated failure of the effort to repeal the Obamacare health plan.

This came to the fore this week when Luther Strange, Mr. McConnell's strong preference in an Alabama Republican Senate primary, was defeated soundly. "Mitch is not, polling-wise, the most popular guy in the country," Mr. Trump said of the Senate majority leader in a remarkable Alabama radio interview, and then went the further step of saying that part of Mr. Strange's appeal was that, in the President's words, "He will be fighting Mitch." Mr. McConnell has resisted Mr. Trump's entreaties to change Senate rules to ease the passage of legislation the President favours.

By a margin of nearly four-to-one, Americans surveyed in this month's Wall Street Journal/NBC News have an unfavourable view of the Kentucky lawmaker. But Mr. Trump and his allies regard him as part of the permanent political class, even as they could use some assistance from the permanent political class in rallying the country and ginning up votes in Congress – two tasks at which these groups are especially adept. The Trump White House almost certainly will need some assistance from the lobbyists on Washington's K Street who already are gearing up to shape the tax overhaul Mr. Trump is proposing.

But short-term factors may be impelling Mr. Trump to keep up the battle against the very power brokers who could help him.

"People feel that their government is failing them and Trump's people are trying to build on that," said Mr. Rehr, the lobbyist-turned-law-professor. "They're pointing the finger of blame at particular entities because they know that there's a disconnect between the people who work here and people in the rest of the country."

But the ultimate arbiter may be the public itself. In 13 months, all 435 seats of the House and a third of the Senate will be contested in midterm congressional elections. As Mr. Trump is fond of saying, the people ultimately rule.

Globe editorial: Trump, the anthem and your right to not take a stand
September 30, 2017 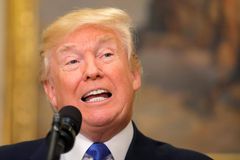 Opinion
The road to Trump started in Vietnam
September 30, 2017 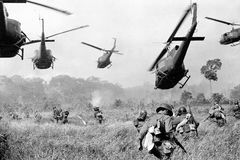 Opinion
A NAFTA overhaul would offer Trump a tiny ray of hope – but don’t bet on it
September 28, 2017