If, as it is often said, sex work is the world's oldest profession, then what to do about it has to be one of humanity's most long-standing sources of angst.

The debate – legal, philosophical, religious, societal – has been sparked anew by Amnesty International's call to decriminalize sex work involving consenting adults. The human rights group argues that criminalization makes it more likely that the rights of sex workers will be violated. Making the buying and/or selling of sex illegal pushes the practices underground, and results in more discrimination, harassment, rape and violence, not to mention compromising sex workers' access to basic health, housing and legal services.

Unsurprisingly, Amnesty's stance sparked angry reaction. The Coalition Against Trafficking in Women said abolishing laws against prostitution would lead to more rights violations against women and girls, including the expansion of human trafficking and child abuse, and would "in effect support a system of gender apartheid."

Human trafficking and child rape are abhorrent practices – which Amnesty condemns, and laws exist to curtail these activities.

While there are women and children sold into sexual slavery, they are not sex workers – they are victims of crimes.

We need to distinguish between coercive and consensual sex.

Catch-all laws that criminalize all sex work solve nothing.

For many – probably most – sex work is just work.

Of course, it's not that simple. Many sex workers, especially the small minority who work the streets, live on the margins of society. They are often driven to sex work through desperation: poverty, homelessness, addiction, the trauma of abuse. But turning sex workers into criminals exacerbates those problems more than it resolves them.

If you approach the issue pragmatically, from a public health perspective, you need to accept that prohibition never has worked, and never will. The priority needs to be on protecting the vulnerable, on minimizing harm.

What two consenting adults do with each other should be of no concern of the state, but that hasn't stopped the flourishing of anti-prostitution laws. Worldwide, the dominant approach is to try and eradicate the commerce of sex. Some countries ban the sale of sex, while others ban the purchase. Neither works particularly well.

In Canada, selling sex is not a crime. Rather, there were a number of restrictions on ancillary activities, such as keeping a bawdy house, communicating for the purposes of prostitution and living off the avails of prostitution, but those were struck down by the Supreme Court in December, 2013.

Subsequently, the Conservative government introduced Bill C-36, the Protection of Communities and Exploited Persons Act, which criminalizes the buying of sex and the advertising of sexual services.

This is the so-called Nordic model, placing the emphasis on arresting the customers. But experience from other countries shows that this approach pushes prostitution into the shadows, where transactions cannot be seen, making sex work riskier.

The same problems crop up when you criminalize the selling of sex. Women, men and transgender sex workers end up more vulnerable to exploitation and violence because they won't go to police, and they are far less likely to seek medical care, even for sexually transmitted infections such as HIV.

The alternative to these failed approaches is decriminalization – to regulate the environment in which commercial transactions occur with the aim of protecting the health and safety of sex workers. It's not perfect, either, but tends to be the least harmful.

Sex workers in countries such as New Zealand, the Netherlands and Germany, where sex work is not a crime, benefit from health and safety laws, up to and including police protection, and health care, just like other workers. And they pay taxes. They are also far more likely to be in the business by choice.

Of course, you have to be careful with that word because it can often mean "least horrible choice." There are not many Hollywood-style Pretty Woman and Happy Hooker characters. But we can't deny there are independent, entrepreneurial sex workers who are not exploited, just as there are those who need exit strategies and social supports.

If we were truly concerned about the impact of sex work on society, our efforts would focus on addressing the root causes of why people buy and sell sex – the isolation, the loneliness, the commodification of human interactions, the desperation, the lack of alternatives.

We would focus on reducing harm, not causing additional harm with pointless punishment. 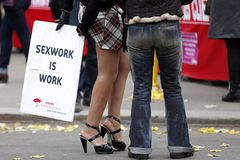 Opinion
Amnesty’s stance on sex work is too narrow in its focus
August 5, 2015