When you stand for two minutes of silence on Monday, what will you be thinking?

For those of us who marked Remembrance Day as schoolchildren in the last century, this was a simple matter: "Never again." We were standing for fellow Canadians who had suffered the horrors of war. Soldiers were victims.

Our schools would invite veterans of the two world wars and Korea, many of whom had been drafted as teenagers, and as we sat cross-legged, they would tell us of mustard gas, flame throwers, dead children, firebombing campaigns, dysentery, terror, loss and shame. And also about the grave and unfortunate necessity of their deeds. The feeling was near-unanimous: We had scarred a generation with the gashes of war, and we should avoid doing so again. War was tragedy.

On Monday, we will mark the last of a dozen consecutive Remembrance Days at war: By next Nov. 11, the final Canadian soldiers will have left Kabul. For a while, at least, war will be something discussed in the past tense.

But during those dozen years, our way of talking about soldiers changed. They were no longer victims: That sort of language was drained from Remembrance Day, and not just in primary schools. When nearly 40,000 Canadians were heading to Afghanistan to fight, it no longer seemed right to speak of them that way.

A new word – "heroes" – took its place on television and in the House of Commons. Part of Ontario's Highway 401 was renamed the "Highway of Heroes." Toronto and Edmonton found themselves with a "Route of Heroes" and a "Heroes Boulevard."

And who could besmirch a battle-scarred soldier the word "hero," even as overuse sanded the word down to near-meaninglessness? In part, this was deliberate. Two books last year, by Noah Richler (What We Talk About When We Talk About War) and Jamie Swift and Ian McKay (Warrior Nation), argued that the shift was part of a larger political agenda, led by Stephen Harper's Conservatives, to remilitarize Canada's national culture. There certainly are figures in the military and in politics who have taken advantage of this – by drawing our attention to the few historic instances where Canadian soldiers played a starring role, by valorizing Vimy Ridge (10,000 Canadian casualties for a tactical gain) rather than Passchendaele (16,000 Canadian casualties for no reason at all), by pretending, for as long as possible, that Kandahar was not a tragic failure, by focusing on the valour rather than the horror.

To be fair, much of the shift to "hero" was probably inevitable while Canada was at war, no matter who formed the government.

But both "victim" and "hero" are ill-fitting and outdated words, legacies from the era of a conscript military. Most experienced soldiers I know feel gravely uncomfortable with "hero." In a modern, professional military, a major part of training is to disabuse soldiers of any notions of heroism, to prevent such lunges for personal glory, to emphasize planning, teamwork and skill. Acts of heroism do happen. But often the best soldiers are those who never experience them. Worse, there has been psychological research suggesting that the ubiquity of public "hero" narratives is making it much harder for battered and emotionally wounded soldiers to recover from their psychic disabilities.

Those thousands of soldiers are the biggest reason why postwar Canada needs to drop the "hero" talk and recognize victimhood as a central, non-shameful part of the soldiering experience. No, our soldiers are not victims of a heartless state the way conscripts were in the past century. It isn't their whole experience, and they don't want it to be. But their pain should return to the focus of our recognition.

Our government isn't doing so: In an utterly heartless move, the Veterans Affairs Department decided to eliminate the disability pension for wounded or traumatized veterans, replacing it with a lump-sum payment that many consider paltry. It has closed departmental offices and veterans' hospitals, making that treatment more difficult to get. This year's report of the federal Veterans Ombudsman concluded that this is leaving wounded and traumatized veterans in worse shape than they've been before: We're flying these "heroes" home and forgetting them.

So on Monday, let's wear the red poppy, stand silently, and think for two minutes about women and men who are neither victims nor heroes, but people who have had awful experiences and deserve better.

Facts & Arguments
My teenaged uncle answered the call of duty, and not just to his country
November 10, 2013 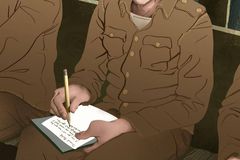 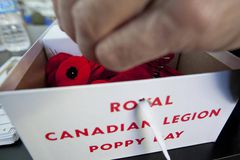 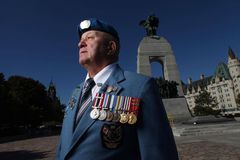