Derek Burney was Canada's ambassador to the U.S. from 1989 to 1993. Fen Osler Hampson is a distinguished fellow and director of Global Security at the Centre for International Governance Innovation and Chancellor's Professor at Carleton University.

Market convulsions erupting initially in China have swamped virtually all other global issues, at least for the time being. Meanwhile, efforts to "degrade and destroy" Islamic State in Iraq and Syria are treading water but with no clear objective let alone resolution in sight. IS's shocking destruction of ancient monuments in Palmyra and brutal murder of one of Syria's most prominent archeologists is a travesty and unspeakable horror, which has been greeted by hand-wringing but little more by Western powers.

But most forgotten of all now is the conflict between Ukraine and Russia. Pressure and provocation from Moscow, in blatant contravention of the Minsk accord, continues unabated. Although Russian President Vladimir Putin continues to deny that Russian troops are fighting in Eastern Ukraine, recent leaks disclose that 2,000 Russians have been killed in combat and another 3,200 have been seriously disabled.

Two ideas proposed recently – one on debt reduction and financial aid by former World Bank president Robert Zoellick and former national security adviser Stephen Hadley and one on peacekeeping by former Swedish prime minister and foreign minister Carl Bildt – offer sensible prescriptions for salvage. What is absent is the political will and leadership to engage by those who purport to support the concept of an independent Ukraine.

Mr. Zoellick and Mr. Hadley contend in The Wall Street Journal that Russia's incursions have destroyed 20 per cent of Ukraine's economic potential and displaced about one million people. The IMF predicts that Ukraine's economy, after dropping by 7 per cent in 2014, will shrink a further 9 per cent this year. Inflation is approaching 50 per cent and shows no sign of stopping its stratospheric climb. Energy prices have quadrupled. These are numbers that would jeopardize the political legitimacy and mandate of any democratically-elected government. The situation is increasingly precarious.

The Ukrainian parliament has adopted comprehensive reforms – judicial, economic and political – in a desperate bid for survival. They have reduced pensions and increased taxes but there are real limits to what Ukraine can do to save itself when its treasury is bare.

As Mr. Zoellick and Mr. Hadley assert, "If Western governments do not stretch to assist – and creditors persist with short-term calculations – the likelihood is that Ukraine will fall back to the post-Soviet world of authoritarian government and gangster capitalism."

The worse the economic plight of Ukraine becomes the less likely will be the prospect of any reforms taking hold. Europe is paying more attention to bailing out Greece, more for reasons of political sentiment than economic prudence, while Ukraine burns and the threat it poses to the collapse to Europe's long-term security and stability is far greater.

Mr. Bildt has suggested separately that, "If Russia is serious about seeking a solution to the conflict, it should be prepared to endorse the deployment of an international peacekeeping mission and force." He sees a parallel in the effort 20 years ago to stabilize events in Eastern Slavonia. The United Nations mission inserted at that time "is virtually forgotten – not because it failed, but because it succeeded."

In the face of Western pusillanimity, Russia shows no more inclination to accept this kind of multilateral mission than Serbian president Slobodan Milosevic did in 1995. Mr. Putin is exploiting the vacuum of empty Western gestures and hand-wringing. He is awaiting the complete collapse of Ukraine's government, which he believes will return Ukraine obediently to the Russian motherland as part of his grand design to build a "New Russia." But he would be hard-pressed to refuse a mission designed to enforce a declaration Moscow has signed, one which his clever mouthpiece, Foreign Minister Sergey Lavrov continues to endorse publicly.

What is missing is a signal of leadership and resolve from the West, either from Washington or the European Union or both, that embraces both a substantial economic package of aid and debt reduction along with a firm commitment to respect and enforce the terms of the Minsk accord through the placement of a peacekeeping force in Eastern Ukraine.

Canada is well-placed to participate and help orchestrate both efforts, even during an election campaign. It would be consistent with our strong rhetorical support for an independent Ukraine and our experience in peacekeeping. We and our Western allies need to walk the walk.

Opinion
Obama in no position to lead globe on climate
August 18, 2015 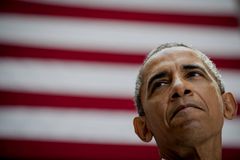 Opinion
Lessons for Canada from down under
July 7, 2015