The head of Quebec's provincial police force says there is no crisis in Val-d'Or, where eight of his officers are now on leave pending the result of an inquiry into alleged abuses against women from the nearby Algonquin community.

But when 30 First Nations chiefs gather on short notice to respond to the situation, as they did on Tuesday in Val-d'Or, it looks very much like a crisis.

It began last week when Radio-Canada's investigation program Enquête revealed shocking allegations by native women of assault and sexual abuse at the hands of officers from the Sûreté du Québec in the mining city 500 kilometres northwest of Montreal.

Last Friday, a tearful Lise Thériault, Quebec's Public Safety Minister, said she was "shocked" by the television program's revelations. A police probe of some officers had been going on for months, but not about sexual abuses. The trouble is that the SQ itself was investigating its members. That probe is complete, it turns out, and is under review by prosecutors. Nonetheless, only a day after standing by the SQ probe, Ms. Thériault said the whole investigation was being transferred to Montreal city police. Eight officers in Val-d'Or are suspended pending the investigation.

Quebec is one of the last provinces to create an independent bureau for criminal investigation of police officers. The bill creating the agency was approved by National Assembly last year and its director has been appointed, but it won't begin operating until next April. Moreover, it will have jurisdiction only in cases of death, gunshot injury or "severe injury" caused by a police officer. Sexual abuse is not included, unless the minister orders so. In most other provinces, sexual abuse allegations are covered.

Of course, an independent investigative body won't solve all of the problems between police and members of First Nations. But the delay and the resistance to this long-overdue process has only made things worse in Quebec.

Ms. Thériault's decision to change course and have the Montreal police look into the Val-d'Or cases was seen as a slap in the face by SQ officers, who claim she violated the presumption of innocence. (On Saturday, the SQ Val-d'Or detachment was deserted by officers who called in sick or took a day off.)

First Nations chiefs are pressing for a public inquiry into the whole affair, and are to meet with Premier Philippe Couillard on Nov. 4.

The Val-d'Or crisis is yet another example of the continuing clash between the justice system and First Nations.

Martin Prud'homme, head of the SQ, has decided social workers would accompany police officers in interventions with members of the Algonquin community. That isn't a bad idea, but what about First Nations police officers? Some native communities have their own police force, which can lead to other problems of proximity. Université de Montréal criminologist Maurice Cusson has proposed creation of joint police forces, so that they would be neither "too close, nor too far."

Then there is the issue of "flying judges," who come in from time to time to deliver justice in remote native communities. First Nations judges and prosecutors in Canada are a rarity. This only adds to the feeling that the justice system is something alien, not to be trusted.

Against such a backdrop, it wouldn't be surprising if there are more Val-d'Ors brewing across Canada. 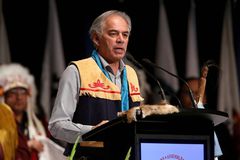 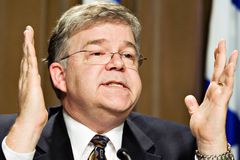 Opinion
Quebec vs. the Hells Angels: A case of justice failing to deliver
October 16, 2015