Homelessness has been an issue for so long many view it as a natural fixture of our world. Inevitable. Unfixable. Quite simply, that's not the case. Mass homelessness is the result of choices we have made. It's time to make better ones.

The federal government has just finished a consultation on what to include in a long-overdue National Housing Strategy. If we get it right, it could mark the beginning of the end of homelessness in Canada.

For decades governments trying to balance budgets opted for false economies, cutting investment in housing and squeezing social and mental-health services. The net result? 100,000 fewer units of housing than would otherwise have been built, and a growth in homelessness in communities across Canada.

Thirty-five thousand people in Canada experience some form of homelessness every day, 235,000 a year! Another 1.5 million people pay more than they can really afford – more than 30 per cent of their income – on housing. Canada emergency shelters are getting fuller – occupancy is up more than 10 per cent since 2004, and those trapped in shelters are staying longer. For seniors and families, the average stay has increased to more than 20 days.

These are obvious human costs, but the cutbacks driving growth in homelessness haven't even saved governments money. The failure to address homelessness means government ends up spending more and more – on emergency shelters, health care, and incarceration. For years, as we trimmed budget lines for housing and services, we added even greater costs to other budget lines, all while leaving more people on the street.

It doesn't have to be this way.

The Canadian Alliance to End Homelessness and York University's Canadian Observatory on Homelessness just released the State of Homelessness in Canada 2016 which outlines the steps governments could and should take to end homelessness. The recommendations are tangible, concrete, affordable and proven to be effective wherever they have been tried including in Canada. It's a list of things that we can actually do.

The report calls for a new federal/provincial/territorial framework agreement focused on community capacity, prevention, and "Housing First" for those now on the streets. Success will need increased investment and leadership at all levels of government and the community.

Priority should be on where the needs are most acute and the impact will be greatest and most immediate – including the chronically homeless, youth, veterans and indigenous peoples.

You can read the full report here.

Yes, there's a price to doing this – $4.4-billion a year for the next decade, an increase of $1.8-billion a year over current investment. But that's only about $50 for each Canadian annually, less than a dollar a week – a bargain when we consider that homelessness costs the Canadian economy $7-billion each year. Ending homelessness would yield a 2:1 return on investment.

It's not often that an issue of national importance cuts across ideologies and partisan politics. Addressing issues of poverty and social justice are regular refrains for progressives; reducing spending while more efficiently using resources are a hallmark for fiscal conservatives. Being a contributing member of society and a full participant in the economy requires an address.

The National Housing Strategy presents an opportunity to make a lasting impact. Let's use it to end homelessness.

Opinion
How to tackle the housing crisis in Canada’s cities
September 30, 2016 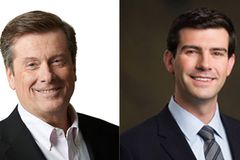 Opinion
Prevention of drug overdoses saves lives and must not be illegal
December 15, 2016
Follow us on Twitter @globedebate Opens in a new window
Report an error
Due to technical reasons, we have temporarily removed commenting from our articles. We hope to have this fixed soon. Thank you for your patience. If you are looking to give feedback on our new site, please send it along to feedback@globeandmail.com. If you want to write a letter to the editor, please forward to letters@globeandmail.com.
Comments