Slowly, painfully, the scab is being picked off the wound of the indigenous woman's experience in Canada, and what's oozing out is pretty revolting. Another piece of crust fell recently when the CBC ran a truly horrific story about RCMP Const. Kevin Theriault, an officer in northern Manitoba who arrested an intoxicated young woman at a party in 2011.

After his shift was over, Const. Theriault returned to the jail out of uniform to take her home and "pursue a personal relationship." While at first a senior officer resisted, Const. Theriault was eventually told "You arrested her, you can do whatever the fuck you want to do."

This one little news item packs a wallop of creepiness and mismanagement. After an internal investigation, Const. Theriault's "punishment" was a reprimand and the loss of seven days pay. There's also no indication that the senior officer who released the woman faced any repercussions. Const. Theriault is a federal police officer, and she was a drunken young woman over whom he had significant power. Any intimacy between them would be coercion at best, and, at worst, rape.

Despite this parade of bleak facts, there is a glimmer, a tiny little ray, of good news. Two of Const. Theriault's fellow officers followed his car and alerted their corporal of the situation. Const. Theriault was told to take the woman home, which he did. I'm not sure whether these officers were among those who earlier in the night were goading Theriault to text and flirt with the woman, so I'm not sure how deep their good streaks run. But ultimately, when time came to act, they did the right thing. This is called the bystander effect, and as conversations about preventing violence and sexual assault become more nuanced, recognizing the importance of the bystander is paramount.

There are reprehensible bystanders: when U.S. NFL football player Ben Roethlisberger was accused of rape in 2008, his accuser said his bodyguards first led her into the room where she was assaulted, then blocked the door. There are those who take, and share, and laugh at, pictures of humiliations and violence, and those who avert their eyes and look away.

There are also courageous bystanders, people who personally alter a course of events, putting their sense of belonging and maybe their safety on the line. In Halifax, fourth-year Dalhousie University dentistry student Ryan Millett says he was the one that went public when the Facebook group "Class of DDS 2015 Gentlemen" moved from immature humour to violent misogyny. Millet was suspended from classes along with the 12 other members of the group, and has hired a lawyer to argue that his whistleblowing should receive appreciation, not punishment.

A friend told me a story once that has stuck with me for years. As teenagers, she and her older sister found themselves at a drunken party in the woods where one particular girl was more inebriated than everyone else. At first, a circle of kids stood around the girl, making fun of her, maybe spitting on her, and then a group of boys tried to lead her somewhere more private. My friend sensed that pursuing a personal relationship was on their minds.

My friend's sister, maybe 17 years old at the time, physically put herself between the girl and the boys and told them that they weren't taking that girl anywhere. She stood up until they backed down, and then she and my friend took the girl someplace safe.

It's unfortunate that this sort of bravery seems so rare that I have to return to this story as a touchstone of human goodness, again and again. I don't know if I could have done what she did, especially as a teenager, when it was even harder to go against the crowd, to listen to the voice inside that knows what's right and wrong but is afraid to be loud. As we talk about consent, and healthy sexuality, and proper punishments for unimaginable crimes, let's not forget the bystander. They're part of the ounce of prevention that's worth more than a pound of cure.

Degrees of misogyny at Dalhousie
January 19, 2015 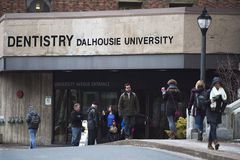