Craig Forcese is a law professor teaching national security law at the University of Ottawa and a participant in the Canadian Network for Research on Terrorism, Security and Society. Kent Roach is teaches at the University of Toronto Faculty of Law and worked with both the Arar and Air India Commissions.

If the attack on Parliament and on Canadian Armed Forces members constituted a failure by the state to exercise its fundamental 'night watchman' function, it was probably not a failure of law. It may not necessarily have been a failure of law enforcement. It was certainly a failure of omniscience. And that may mean it cannot be cured.

We have taught and written about national security law for a dozen years, and inevitably see what happened through the lens of how Canada and the world responded to 9/11 and the 1985 Air India bombing that killed 331 people, the majority of whom were Canadians. This experience suggests that there will be second-guessing about "intelligence failures" and "failing to connect the dots." There will also inevitably be a demand for legal "fixes" designed to forestall recurrences.

To be sure, there is a need to learn lessons from the two recent terrorist attacks. Why was there enough evidence to keep Martin Couture-Rouleau off flights but not to prosecute him? We presume there is a need to revisit the Air India Report that devoted an entire volume to discussing the challenges of converting secret intelligence into public evidence.

We also await the government's pending terrorism bill. In an attempt to increase public understanding, we have posted our responses to legal FAQs raised by this week's events. The existing tools are expansive. But blaming law will be a natural reaction. The Criminal Code grows in girth not because the evil of humans is ever mutable, but because high-profile manifestations of that evil demand a new political response of some sort. For federal law makers, that often means enacting new criminal or security laws. It will be next to impossible for parliamentarians to resist the lure of new legal enactments, some responsive to these recent events and some more distantly related.

So we will likely embark on discussions of new legal surveillance powers, and possibly new forms of "preventive detention". But along the way, we should not lose site of the fact that policing and intelligence powers are only one part of the equation. A number of states (including Canada) deploy various "soft" measures designed to discourage persons from becoming foreign fighters (or "radicalized" and prone to violence).

Academic research that we have seen suggests that these civil-society-oriented approaches are fruitful and necessary. We cannot prosecute or detain our way out of the radicalization problem. Although this truth has become surprisingly politically contentious, the sociology of anti-terrorism cannot be ignored. Outreach and partnerships in Canada's diverse Muslim community is necessary. We should also be aware that heavy handed approaches, especially those focusing on speech, might have the unintended consequence of being counter-productive.

Any new law project or proposed power must be evaluated on its own merits. This requires time for deliberation. Early days suggest Canadians and their law makers appreciate the need to build restraint into the foundation of new powers. Hopefully new legislation will recognize (as was not done in the post 9/11 legislation) that oversight and review of security in Canada is in disarray and that public confidence requires effective accountability that can keep pace with increased and integrated security activities.

There will also be questions asked of the police and security services and their operational decisions. In a democracy, they should not be immune from criticism, but we should have the humility to recognize that their many successes are often invisible and that their failures are tragically obvious to all.

And if we are to question operational matters, we need to consider what it would mean to preempt the prospective actions of every, single individual bound on doing harm and willing to die to cause it.

Fully securing an open society is like squeezing water. Certainly, likely targets can be "hardened", but at the risk of diverting risk to other locales and persons. To wish for perfect security is to ask for an all-seeing state. That may soon be within technological reach, but the state secured in that manner is not one that many people would recognize, or choose.

The unsatisfying answer is that risk can be mitigated but not eliminated. The laws we enact and the security activities we authorize should not assume more. 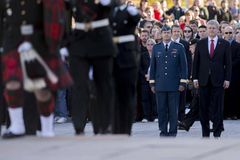