Tim Elcombe is the chair of the department of kinesiology and physical education at Wilfrid Laurier University and a fellow at the Balsillie School of International Affairs.

The NFL season kicked off earlier this month, yet discussions about an unemployed backup quarterback continue to linger from the off-season.

Colin Kaepernick, the former San Francisco 49ers quarterback best known for refusing to stand during the American national anthem, remains without a team. Some believe his absence from the NFL is a consequence of team owners – mostly conservative white males, some of them avid Trump supporters – making an example of Mr. Kaepernick for his public protest of law-enforcement officials' treatment of black citizens. Some pundits suggest his presence would be a distraction, or point to mounting evidence his skills continue to fade after multiple surgeries, or claim that his style of play doesn't translate well to the role of backup QB.

Whether it's his play on the field or his actions on the sidelines that are responsible for Mr. Kaepernick's exclusion from the NFL, the "big picture" issue we ought to consider is our collective reactions to activist athletes more widely – and what it says about us.

The public has a complicated view of socially engaged athletes. On one hand, we celebrate when athletes use their fame and fortune to "give back" to society. We love P.K. Subban for donating $10-million to the Montreal Children's Hospital and Clara Hughes for speaking openly about mental health. Disengaged athletes, despite their fame and fortune, are seen as vain, selfish and less than heroic. Player agents and team PR staff understand this, and press athletes to generate a charitable persona off the field.

On the other hand, when athletes speak out on politics, human rights, social inequality or similarly sensitive topics, they are told to "stick to sports."

We are accepting when artists challenge the norms of society (think Bono), but not when athletes, especially high-profile team-sport athletes, do it. Artists can have "idiosyncrasies," but athletes come from a world of rules, codes, hierarchies and sacrifice, and we expect these to extend beyond the playing surface.

Canadian sports fans rightly express their pride for former basketball star Steve Nash's use of his wealth and influence to engage in many charitable causes over the years, such as building hospitals in Paraguay. But back when he took a public stand against the Iraq War, reactions were mixed. Many argued that a point guard should leave political issues to people more qualified.

My point is that "charitable" athletes are viewed as heroes and role models, but "activist" athletes are seen to be distracting, disrespectful and self-promoting.

Yet socially engaged athletes of all stripes are needed now more than ever precisely because so many people – especially young people – pay attention to them. A 2016 Journal of Democracy study found only one in three Americans born since 1980 believe living in a democratic nation is "essential."

How can this be? The study's authors concluded that young people lack faith in their leaders, don't believe they can influence policy or social change, and are generally cynical about democratic institutions. How do we counter this growing cynicism and convince young people social change is possible (and needed) through the democratic process? We need public figures willing to challenge the status quo, to generate discussion on issues, to critique our laws and policies to, in essence, make democracy better.

So why not then encourage athlete activism? Athletes have the advantage of existing in very public spheres, providing them opportunities to generate discussions far wider in scope than most can, including politicians. Sure, we might not always like what they represent or how they convey their position. Sometimes they will be less informed than bureaucrats, or express themselves less eloquently or tactfully. So what? We should celebrate everyone willing to engage in the democratic process, especially those capable of connecting with young people.

The Colin Kaepernicks of the sports world challenge us to critically examine societal norms, to question our policies and practices, to consider viewpoints not always expressed. Let's embrace them, whether or not we agree with them – unless you would rather leave democracy to only those invested in the success of their political parties and to career bureaucrats. In which case democratic cynicism will continue to flourish.

We should think of Muhammad Ali, who died only weeks before Mr. Kaepernick began his anthem protest, the next time we tell athletes to keep their distance from controversial issues. Although he lived his last years appreciated as "the Greatest," Ali was widely castigated in his boxing prime for his outspoken views on race, religion and the Vietnam War. He was no politician and no expert, but he brought these debates into the homes of the masses, whether we liked it or not.

Imagine if Ali had just stayed in his corner and boxed. Now imagine if Kaepernick stood for the anthem. He'd probably be playing NFL football this weekend, and we probably wouldn't be having this discussion.

When an athlete protests by sitting out the anthem
September 9, 2016 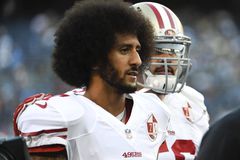 About Art Briles: Money, not morals, is what matters in professional sports
August 28, 2017 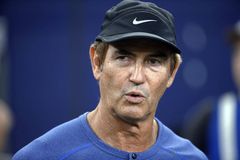 Opinion
Kelly: Regarding Kaepernick’s unemployment: Oh, it's ‘a system thing,’ all right
September 1, 2017 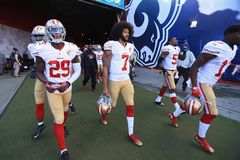