There are few sights more melancholy than that of uncompleted buildings on which all work has stopped. Such buildings conjure up the spectre of a civilization that has collapsed even before it flourished.

Since everything in Dubai is on the most expansive scale - the largest, the swankiest, the most gilded - its de facto moratorium on further construction is likewise on the very grandest scale. Motionless cranes hover over vast buildings at all stages of construction, from mere hole in the ground to iron-and-concrete skeleton and near completion. Even thousand-foot towers that require only a few more sheets of finishing cladding are left incomplete.

To adapt (very slightly) the lines of Percy Bysshe Shelley: My name is Rashid Al Maktoum, bling of blings: Look on my works, ye Vulgar, and despair! I looked out of my window and, of 12 buildings I saw under construction, work was continuing on just two - and those the smallest of them.

When work on skyscrapers stops, the entrails of these vast edifices are exposed to the gaze, and somehow seem frighteningly fragile to support the immense weight of what they are supposed to eventually contain. One never takes the lift in such a building with quite the same insouciance as one did before. The marble, the steel, the glass of many colours with which the buildings will be covered seem but a veneer to conceal a deep inner shoddiness of rough concrete, cement and breezeblock. The veneer of civilization that covers man's eternal savagery seems several layers thick by comparison.

Will the sand reclaim Dubai as the jungle once reclaimed Angkor Wat? Despite a fall in property prices of more than 50 per cent within a week or two, the official line is that the "fundamentals" of Dubai's economy are strong and recovery will be swift. But what are the fundamentals of an economy built on confidence, celebrity, spectacle, dream, fantasy, illusion and debt, to say nothing of an infinite supply of cheap labour from India, Pakistan and the Philippines? The latter, at least, seems secure for the foreseeable future.

Driving around Dubai, one wonders how anyone could have failed to see the crash coming. Scores of completed buildings, offices and apartment blocks alike, stood empty. It is not that their occupants had gone, driven out by the crisis: They were never occupied in the first place. No man with eyes in his head and one or two very simple economic principles in his mind could have supposed that the only way for property prices in Dubai to go was up. Debt and investment are by no means always symbiotic.

Even as a shopping destination - Fly, Buy, Dubai was long the city-state's national slogan, its equivalent of Liberté, égalité, fraternité - Dubai has fewer and fewer attractions. One of the problems with free trade is an increasing equalization of prices, of goods if not of labour, throughout the world; the shoddy and trivial glamour of designer labels can be had for the same price everywhere.

Why, then, go to Dubai? To an astonishing extent, the city is dependent on the excellence of its airline, Emirates. No one who had the choice would fly anything else; all North American and European airlines, by comparison, are wretched. And the airline is very profitable, if official figures are to be believed. (Some claim the profits are subsidized by preferential landing fees at Dubai, though this is also denied.) At the very least, the airline poses an interesting challenge to those who say that, under any circumstances, a state-owned company cannot be efficiently run or provide good service.

Will this be enough to extract Dubai from the mire, or rather from the dune? A former Australian prime minister, Paul Keating, once said of the leader of the opposition that "a soufflé cannot rise twice." Can fantasy and illusion return after a cold shower of double-entry bookkeeping, or are they like the blush of a grape, once gone never to be restored?

Illusion is part of human history, one might almost say human destiny. One bubble is always replaced by another - my bet is on alternative energy stocks. But lightning seldom strikes twice in the same place, and bubbles aren't usually reinflatable once they've burst.

On the other hand, Dubai is so fantastical, so utterly and genuinely ersatz, that, like Las Vegas, it adds to the gaiety of the globe. I hope it survives, so I can continue to stop off there on my way to the Far East and dine in underwater restaurants amid the sharks and the groupers.

British writer and retired physician Theodore Dalrymple is the author of Our Culture, What's Left of It: The Mandarins and the Masses.

Opinion
Brown was a sitting duck, Cameron was potato peelings
May 11, 2010 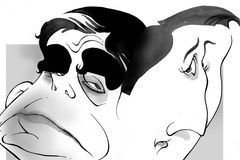 Opinion
Mon Dieu, the French are behaving like the English!
September 18, 2009 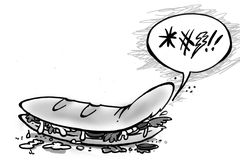 Opinion
His bizarre and childish whims
June 30, 2009
Opinion
British MPs have united the people - at their own expense
May 20, 2009
Follow us on Twitter @globedebate Opens in a new window
Report an error Editorial code of conduct
Due to technical reasons, we have temporarily removed commenting from our articles. We hope to have this fixed soon. Thank you for your patience. If you are looking to give feedback on our new site, please send it along to feedback@globeandmail.com. If you want to write a letter to the editor, please forward to letters@globeandmail.com.
Comments