The millennial generation has been analyzed and criticized for years. It's been labelled as self-absorbed and lacking discipline in the work force by its Gen X and baby boomer peers.

Times are changing. What appeared at first to be apathy is now considered a new, more creative and democratic approach to work that some argue is positioning millennials (also known as Gen Y) for leadership roles.

"Millennials are the future, Gen Xers are already the past when it comes to managers of the future," says Dr. Mary Donohue, a generational expert (and Gen Xer) who founded Donohue Mentoring System, which offers leadership development programs for corporations.

Based on research she conducted last year using 300 case studies across all three generations, Dr. Donohue noticed a pattern in work habits and leadership outlook. (See chart above for details.)

For instance, she says boomers are builders who came into the work force with steady jobs and pensions, looking to create a legacy and get a seat in the corner office. Gen Xers, because they graduated into a recession in the late 1980s and early 1990s, worried more about putting their heads down and keeping a job, focusing on completing tasks to prevent getting fired. 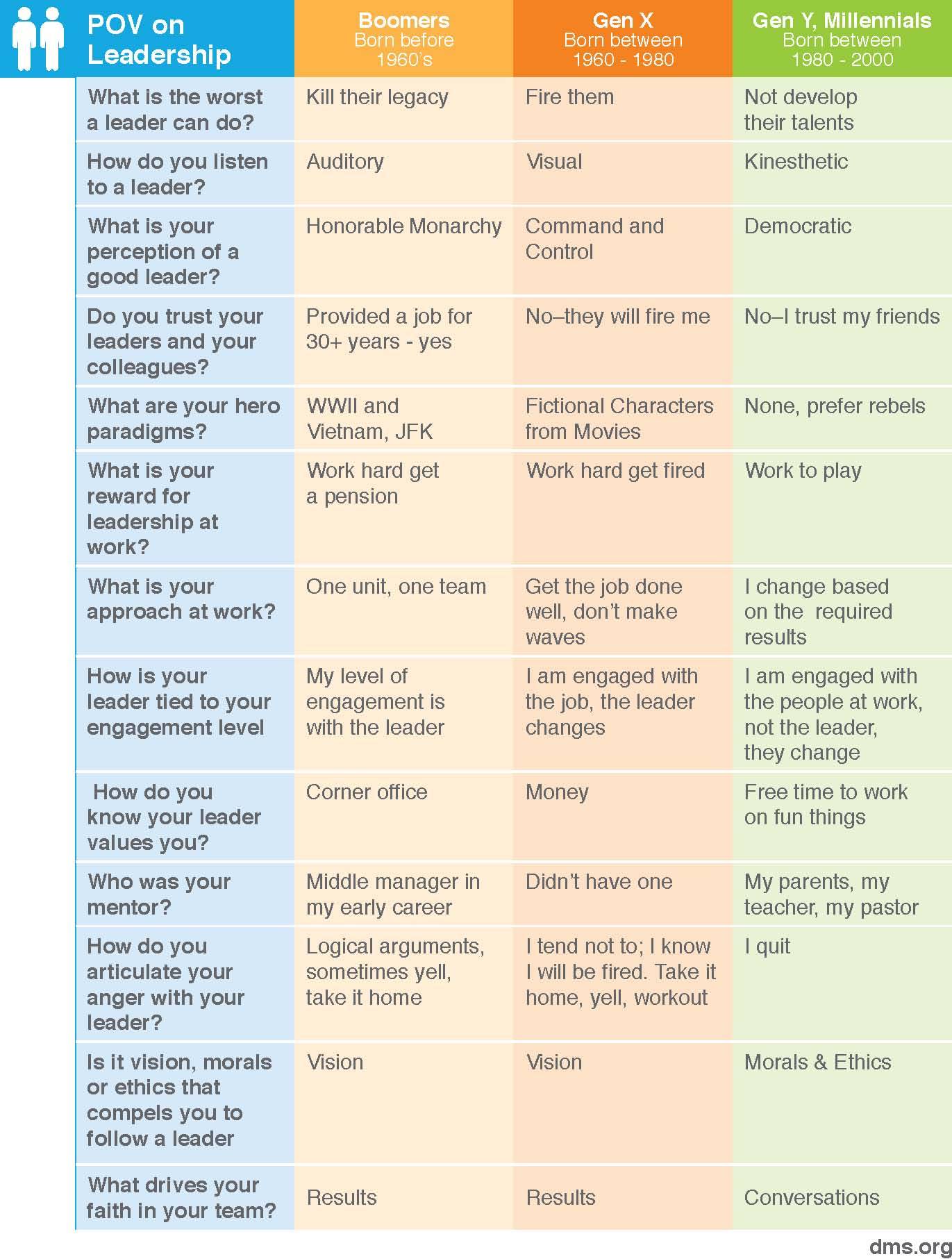 Millennials, born between about 1980 and 2000, are more social and interested in what they can get out of a job to meet their future career goals. Dr. Donohue's research shows that they value people over money, and over having their name on a door, which she argues sets them up to be better leaders.

"With Gen X, they are so task focused because they've been trained that way," Dr. Donohue says. "That is where you're going to see millennials leapfrog over Gen X."

Companies across Canada are paying attention to the differences between generations, especially as millennials enter the work force in increasing numbers.

Match Marketing Group recently commissioned its own study to gauge information on millennials in the workplace to help with recruiting and to shape its corporate policies.

It discovered some stark differences between what millennials want versus what Gen X wants.

The research, conducted by Dr. Donohue, found that millennials were looking for three key benefits from employers: security, career planning, and health and wellness benefits.

The research also showed millennials crave teamwork and meaningful employment that makes a difference in the community.

The results led Match to develop career path programs, including five-year plans for jobs, as well as more training programs and benefits packages that include time off to do volunteer work.

David King, Canadian director at human resources consultancy Robert Half, says his company's own research dispels the myth that millennials are lazy and disengaged from the work force.

They just look at work through a different lens, and communicate much differently than the older generations, he says.

"Research tells us they don't take their careers any less seriously than other generations, they just manage them differently. They achieve balance through technology and comfort that you can be somewhere other than physically in the office and still be working, depending on the job."

Millennials also approach decision-making differently. While boomers want to be informed when a decision is made and Gen X want to be included at some stage, millennials believe decisions should be made as a team from start to finish, King says.

"You can't blanket the entire generation with these characteristics, but these are the trends and norms we see.

The generational differences are important for companies when building and managing teams, and producing results.

According to Robert Half research conducted a few years ago, 72 per cent of hiring managers found it challenging to manage teams of different generations. However, 43 per cent of workers saw it as a benefit, despite differences in work ethic and approach to work/life balance. Thirty-five per cent said working on multigenerational teams led to increased productivity.

"That is ultimately because of the different perspectives," King says. "Once they get through a stormy phase where they start to work together better, they produce better results on average than a team with people from the same generation."

A lot of millennials might appear to be disengaged because they're having trouble breaking into the work force, especially with so many boomers sticking around for longer than expected.

A CIBC report released last year found that while Canadian youth are more educated than the previous generation, they're having more difficulty find lasting and meaningful jobs.

The author, CIBC deputy chief economist Benjamin Tal, found youth are becoming increasingly under-employed after graduation. He said about 22 per cent of teens and 14 per cent of youth 20-24 who are out of school are only working part-time – a record high for both age groups and a huge increase from previous generations.

"Some people call them the 'lost generation,'" Tal said in a recent interview.

"The job market they're graduating into is the most exciting for opportunities but the barriers to entry are highest," he says. "If you open this gate, it's paradise. The gate is the difficult part."