A leaked audio tape reveals that Mr. Harper told a business audience in Montreal that neither Canada nor the United States wants a renegotiated North American free-trade agreement, and that Mr. Trudeau’s government believes it is “winning” in a fight with Mr. Trump. The tape was first reported by CTV News and later obtained by The Globe and Mail.

“The problem right now is that we have two governments that do not want an agreement,” the former prime minister is heard telling a private luncheon hosted by the Australia-Canada Economic Leadership Forum in Montreal on July 11.

“The reality is the government of Canada believes today that it is doing very well, the fight with Trump is good for it politically. It is winning and so if it can take that fight and continue it and more importantly paint Conservatives as linked to Donald Trump, this is great for them.”

At an event in Markham, Ont., Mr. Trudeau told reporters that the NAFTA negotiation is an “all-hands-on-deck” approach, and that the government regularly works with Conservative politicians on the file, including former prime minister Brian Mulroney. He also said that he has had conversations “with a broad range of people,” including Mr. Harper.

Mr. Trudeau also said Friday that Canada is still pushing for a three-country NAFTA deal despite rumblings of a bilateral deal between the United States and Mexico. A Canadian delegation, including Foreign Affairs Minister Chrystia Freeland, is set to travel to Mexico next week.

A spokeswoman for Mr. Harper, who now runs a consulting firm, did not respond to a request for comment on Friday. A spokesman for Andrew Scheer said that the Conservative Leader would not comment.

Conservative foreign-affairs critic Erin O’Toole told The Globe that Mr. Harper is “fundamentally correct” in his assessment that the Liberal government has attempted to contrast Mr. Trudeau with Mr. Trump during the NAFTA talks.

While Mr. O’Toole said he does believe that the Liberals want a new NAFTA deal with the United States and Mexico, he said that the Trudeau government has made decisions that make a final deal more difficult, such as the inclusion of progressive values and walking away from Mr. Trump’s demand for a five-year sunset clause.

“[Stephen Harper] is essentially saying that there’s politics on both sides of this. Yeah, no question about it,” Mr. O’Toole said. “Some of these things are being done so the Prime Minister can point to his foundational issues purely for politics, not for actually driving to a negotiated set of terms.”

Mr. Harper, who was recently in Washington to meet with Mr. Trump’s top economic adviser, Larry Kudlow, told the business group that he would “never go anywhere in the world and purport to represent the government of Canada.” He said that his visit to the U.S. capital was in the context of his role as president of the International Democrat Union – a global association of conservatives – as well as a group called Friends of Israel. He also said that he was there in “some client contexts,” but didn’t elaborate.

The former prime minister, who recently appeared on Fox News to argue in favour of Canada as a key U.S. ally, said that he had conversations with the Trudeau government about “quietly helping,” but accused the Liberal government of releasing news about his D.C. visit before it was confirmed and attacking him on a partisan basis.

Manitoba Premier Brian Pallister told reporters at the closing news conference of the premiers’ meeting in New Brunswick that perhaps the former prime minister “makes a valid point” about being underutilized by Mr. Trudeau’s team. 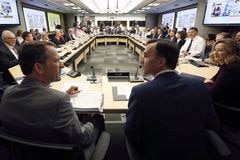