Options for enhancing the federal Fiscal Stabilization program are now on the agenda for a forthcoming two-day meeting of Canada’s finance ministers in Ottawa.

The meeting is scheduled to begin on Monday Dec. 16, which is after the House of Commons rises for the holidays.

The annual December meeting of finance ministers is the time when provinces and territories are informed of the exact amounts they will receive through various federal transfer programs as they plan their budgets for the coming year.

This year’s gathering comes on the heels of last week’s Council of the Federation discussions, in which all premiers endorsed calls from Alberta and Saskatchewan for a review of the fiscal stabilization program.

The program is meant to be a form of emergency fund for provinces that experience a sudden and sharp drop in revenue because of economic factors. However, the program’s size is constrained by a per capita limit of $60 that has not kept up with inflation.

Pierre-Olivier Herbert, a spokesperson for Mr. Morneau, confirmed to The Globe that the issue will be on the official agenda when finance ministers meet.

“A number of provinces have indicated that the Fiscal Stabilization program would benefit from further discussion and evaluation,” he said. “In light of these concerns, our government will launch a discussion on the objectives and parameters of the Fiscal Stabilization program at the upcoming finance ministers’ meeting, with a view to considering any appropriate adjustments.”

Expanding the program is one of several priority demands from Alberta Premier Jason Kenney, who is bringing a third of his cabinet and a third of the province’s deputy ministers to Ottawa for two days of meetings this week, starting Monday.

The program’s current rules allow Ottawa to offer help when a province experiences a decline from the year before in non-resource revenues that is greater than 5 per cent. A sharp decline in resource revenues can also be taken into account if it exceeds 50 per cent.

Mr. Kenney said the program should cover a multiyear period and the changes should be retroactive to 2014. At a news conference Friday, the Premier said that this, along with removing the per-capita cap, would generate a $2.4-billion federal payment to his province.

“We are not seeking a special deal. We are seeking a fair deal,” he said. “If Ottawa and the rest of the country wants to continue to benefit from Alberta as the goose that’s laid the golden egg in modern Canadian economic history, then Ottawa needs to unleash us to be able to develop our resources, get to global markets, get a fair price from them and not tie us down with an endless number of new laws and regulations that inhibit our responsible sector.”

Alberta received a stabilization payment of $251.4-million in 2016, which was the maximum payment allowed under the existing rules.

Quebec and Newfoundland and Labrador have also recently received stabilization payments. Prior to 2015, there was an 18-year period in which no provinces qualified for payments under the program, which is much smaller and separate from the federal equalization program. 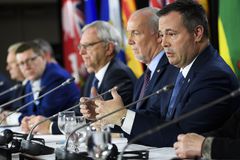