Joan Bryden
OTTAWA
The Canadian Press
Published May 5, 2021 Updated May 5, 2021
Comments
Text Size
Please log in to listen to this story. Also available in French and Mandarin. Log In Create Free Account

Legislation aimed at ensuring a federal election could be safely held during the COVID-19 pandemic is stalled in the House of Commons, even as Justin Trudeau’s Liberals are fast-approaching the average expiry date for minority governments in Canada.

And he suggests that may be because Conservatives actually want to discourage voters from casting ballots should there be an election this summer or fall.

But Conservative House leader Gerard Deltell says the Liberals have only themselves to blame for the fact that C-19 has had only three hours of initial debate in the Commons since its introduction almost five months ago.

Either way, the chances of the bill jumping through all the legislative hoops and passing before Parliament breaks for the summer are wafer thin.

Minority governments in Canada have lasted on average just over a year and a half; Prime Minister Trudeau’s government will pass the 18-month mark in a couple of weeks.

Trudeau could pull the plug on his own government at any time. Or the government could be defeated if all three opposition parties vote against it on a confidence matter, plunging the country into an election.

All parties profess not to want an election during the pandemic, yet one or another has repeatedly forced votes of confidence, a dynamic LeBlanc says is akin to “playing chicken and hoping the other person swerves.”

As the government comes up on its two-year anniversary in November, “the odds are going to increase … that somebody trips over the wire,” he said in an interview.

Because of that unpredictability, chief electoral officer Stephane Perrault last fall urged parliamentarians to swiftly pass legislation empowering Elections Canada to temporarily adopt new measures to ensure the safety of voters and poll workers and provide easier access to voting in the event of an election during the pandemic.

In response, the government introduced C-19 in December. Among other things, it would allow for a three-day voting period, rather than the usual one day, and make it easier for voters to obtain and cast mail-in ballots. It would also allow Elections Canada more flexibility to conduct mobile polls in long-term care facilities.

“We’re quickly running out of time if there’s an election this fall … to have these measures in place,” LeBlanc said.

The Conservatives used a procedural tactic in February to prevent the start of second reading debate on C-19. It finally came up for three hours of debate on two separate days in March.

It was to have been debated again last week but was bumped from the agenda by the government to allow for fast-tracking of an urgent bill to end a dockworkers’ strike at the Port of Montreal. This week’s agenda is taken up with the budget implementation bill.

LeBlanc said Conservatives have refused to give the government any indication of how many MPs wish to speak on C-19. That, he said, signals their intention to talk out the clock whenever the bill does come up for debate, preventing it from being put to a vote and moving on to a Commons committee for deeper scrutiny and potential amendments, to which LeBlanc said he’s “wide open.”

“It’s the Conservatives that are complicating it. They’re giving us absolutely no indication that they’ll let the debate conclude.”

With the calendar full with priority bills on pandemic relief and budget measures, LeBlanc said the government can’t afford to have the Commons “take days and days and days listening to the Conservatives on what should be … a consensus issue to make some common sense, time-limited changes that keep election workers and volunteers safer.”

“The irony is the people who are impeding those common sense changes … are the ones who also vote no confidence in the government all the time,” he added.

But Deltell argued the bill’s lack of progress is the government’s fault for not putting it on the House agenda more often.

“Liberals have only themselves to blame for the slow progress of their pandemic election bill,” he said in a statement to The Canadian Press.

Even if the bill received approval in principle immediately, Deltell noted it would be sent to the procedure and House affairs committee, “where Liberal members have been filibustering for more than 39 hours over two months to block witness testimony related to” Trudeau’s decision last summer to prorogue Parliament for six weeks.

“This filibuster will need to end before the bill can be considered,” he said.

New Democrat MP Daniel Blaikie – who wrote fellow parliamentarians last June on the urgent need to figure out how to safely conduct a pandemic election – said he’s “a little puzzled and disappointed frankly” that the Conservatives seem intent on blocking the bill even before it gets to committee.

“At this point we’re talking about is it wise to run an election under the existing rules. The answer is very obviously no and, if there’s problems with the bill, you sort those out at committee,” he said in an interview.

At the same time, Blaikie said the government needs to put the bill before the House more often and at least try to find a way to move it forward.

“They need to deal with a challenging and obstructionist official Opposition on just about every piece of legislation … I don’t see why this is any different. This is about the government choosing its priorities.”

Blaikie said Trudeau could remove the urgency for the bill by promising that he will not trigger an election as long as the pandemic persists.

But that’s a promise LeBlanc said won’t be forthcoming.

“No government can remove its ability to ensure that Parliament can continue to work, particularly during a pandemic,” he said.

Regardless of whether the government or opposition parties trigger it, Blaikie said “there will eventually be an election” and it would be “a bloody shame” if it winds up putting public health at risk or resulting in “a whole bunch of people” not voting, thereby casting doubt on the legitimacy of the outcome.

Without C-19′s measures, LeBlanc agreed some voters wouldn’t feel safe or wouldn’t be able to cast ballots during the pandemic. And he suggested that might be the Conservatives’ motivation for blocking the bill, noting their past attempts to “suppress the vote” – a reference to controversial changes to election laws passed by the previous Tory government despite warnings from electoral experts that they would disenfranchise hundreds of thousands of voters.

“I wonder if the Conservatives don’t prefer an election without these safeguards, deliberately hoping it drives down the turnout,” LeBlanc said. 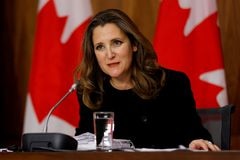 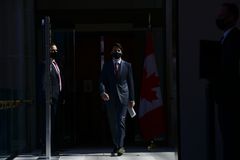 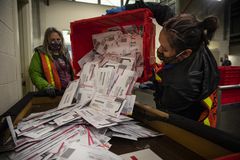